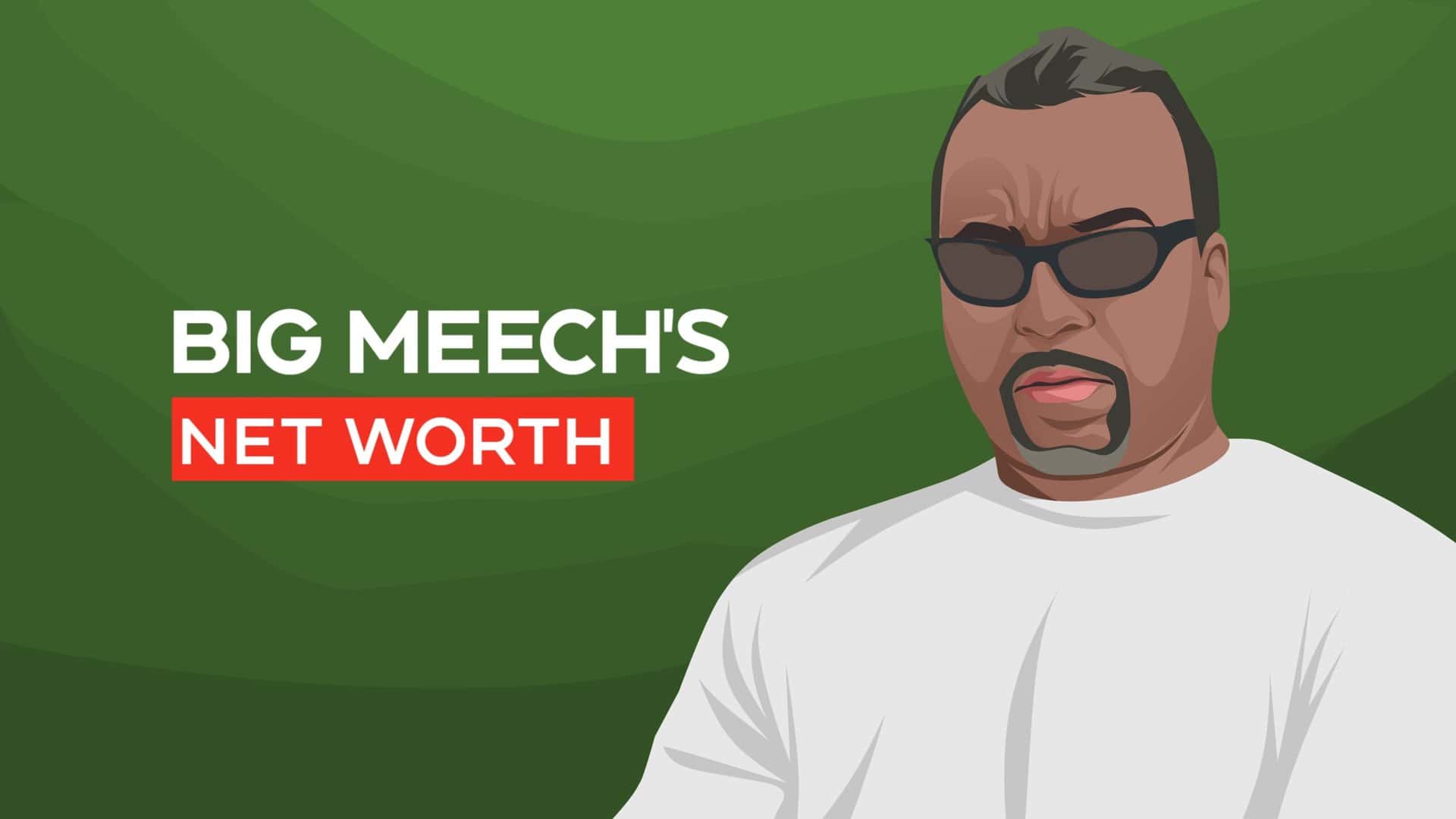 Big Meech went from humble beginnings to building what federal investigators described as a “multi-state, multi-million dollar criminal enterprise with direct links to Mexican-based drug-trafficking cartels.” As of 2005, he had an estimated net worth of $100 million. Here’s all you need to know about the life and wealth of Big Meech.

Who is Big Meech?

Big Meech is an American entrepreneur and convicted drug dealer. He's the founder of the Black Mafia Family (BMF) and its hip-hop and rap music entertainment brand in Southwest Detroit. Born into humble circumstances, he sought to improve his conditions and became a businessman and entrepreneur at 17. He dealt with illegal substances, established drug routes in Los Angeles and connections with other drug cartels, and gained wealth until he turned 35.

Interviews with Big Meech by magazines and journalists showed an intellectual with a keen eye for business and dispensable expertise. Mara Shalhoup, author of BMF: The Rise And Fall Of Big Meech And The Black Mafia Family, said it was “very much like sitting across from an entrepreneur except he was behind a plexiglass window.”

What Is Big Meech’s Net Worth?

In 2005, at the peak of his career, Big Meech had a net worth of $100 million. The combination of his ventures brought profits of about $270 million. However, since his incarceration in 2008 and the possession of his properties by authorities, his current net worth remains unknown. No doubt, it's dropped considerably.

What Is Big Meech Famous For?

Big Meech gained notoriety for being one of Los Angeles's biggest drug dealers. His links with the Mexican cartels, huge organizational membership, and extensive networks across the states put him at odds with the Drug Enforcement Administration (DEA). He made great strides in the rap music industry. Meech did this by bringing some of the widely recognized artists like Bleu Davinci and Young Jeezy to the spotlight. He also built the Black Mafia Family criminal empire and its media outlet, BMF Entertainment. The outlet supported upcoming rap talents and hosted extravagant gatherings.

Born on the 21st of June 1968 to the Flenory Family, Demetrius Edwards Flenory AKA Big Meech was the eldest of three children. His younger brother Terry Flenory also known by the moniker Southwest T was born on the 10th of January, 1970. His younger sister, Nicole was born in 1974. Their parents were Charles and Lucille Flenory. Life for the Flenorys was improvised and riddled with threats of home displacements and starvation. This pushed Big Meech and his brother to the career that would define the greater portion of their lives.

Often regarded by the stereotypical rap tag “player” and usually seen in the company of many women as was common to record label owners, Big Meech has had multiple romantic entanglements but no verified marriages. However, he had a son, Demetrius “Lil Meech” Flenory Jr. with Latarra Eutsey. Born on the 22nd of April, 2000, and his father imprisoned in 2008, young Demetrius Jr spent his childhood without the presence of his father though he kept in touch with him.

Demetrius became a professional rapper with a budding acting career. He even went portrayed his father in the 2021 crime television series, BMF. There's a second season scheduled for release in 2023.

The Black Mafia Family, BMF, was the establishment formed by Big Meech and co-headed with his brother, Southwest T. They dealt in cocaine distribution in Detroit, Michigan from the early 1990s. Later, they expanded their operations to other states including Missouri, Kentucky, Georgia, Alabama, Tennessee, California, and Texas. The criminal company was reported to have operated namelessly from its initiation. However, the wide range of their ambitions from the 1980s to the 2000s drew attention to Big Meech and the BMF activities both from admirers and the authorities alike.

Formed in the early 2000s, the BMF was a cover for their drug operations. The "legitimized" front, BMF Entertainment, aimed to dodge federal prosecution. BMF continued its illegal money-making schemes by moving narcotics in hidden vehicle compartments. The BMF had a membership of 500 participants. Investigating authorities called it a “multi-state, multi-million dollar criminal enterprise with direct links to Mexican-based drug-trafficking cartels.”

The federal authorities investigated Big Meech and the BMF in 2003. There was a rift between the Flenory Brothers coupled with Big Meech’s thriftless lifestyle and violent activities surrounding his organization. They're credited with thefts, rapper feuds, gang shootings, and murders. This led to the inevitable arrest of both brothers in 2007 and incarceration in 2008. Each brother got a 30-year sentence for the nationwide supply of illegal narcotics.

Following the allegations the government seized:

How Did BMF Impact Big Meech's Net Worth?

At its zenith, the BMF reaped a profit from its narcotics trade and music production of about $270 million. This contributed greatly to Big Meech’s highest recorded estimated net worth of $100 million.

However, with the seizure of his possessions, the shutdown of the BMF's illegal operations, and the arrest of Big Meech himself, his current net worth is now unknown. That's to be expected, given that he'll be behind bars for a 30-year sentence.

What is Big Meech's net worth?

He had an estimated net worth of $100 million in 2005, one of the most successful years of his business. Given his conviction and sentence, his current net worth has not been ascertained.

What is the source of Big Meech's wealth?

How did Big Meech become wealthy?

He acquired wealth by applying business acumen to his affairs in the hip-hop music industry and underground associations in the drug trade.

What Is The Black Mafia Family?

The Black Mafia Family was the organization through which Big Meech and his brother conducted their criminal activities from 1989-2005. It was named BMF in the early 2000s, in an attempt to legitimize it. Based in Detroit, BMF conducted its illegal endeavors in the cocaine drug trade and rap music industry. It pushed narcotic products across several states and promoting upcoming hip-hop artists respectively.

Ultimately, the DEA investigated the organized crime enterprise and subsequently shut down the operation. It convicted and incarcerated Big Meech and his sibling for drug trafficking, money laundering, and related acts of violence by BMF members.

What Did Black Mafia Family Do?

The BMF was engaged in money laundering, illegal drug supply, and distribution from its origins and subsequently, rap and hip-hop music promotion. From Detroit to Los Angeles, the drug trafficking establishment was highly organized. It used concealed vehicle compartments to move its products to great distances. Plus, it built cross-border partnerships such as the Mexican drug cartels.

The entertainment part served as a front for the incriminating activities of the Flenory Brothers, despite its success with upcoming rap artists and hip hop at large. With its promotion of new and renowned rappers, the BMF hosted opulent parties that established business connections. This promotional arm boosted the careers of prominent artists like Bleu Davinci.

From its creation in the late 1980s to mid 2000s, the BMF’s notorious investments brought in an estimated value of $270 million. It came from purchased estates, ornaments, luxurious cars, and cash gains from drug dealings. It was investigated by the DEA 2003. Subsequently, it shut down following the indictments and jailings of its leaders, Big Meech and his brother, Southwest T, in 2007 and 2008 respectively.

How Is Big Meech Connected To The Black Mafia Family?

Big Meech was the founder of the organization and ran its operations with his brother. He became a district head after a fallout with his sibling in 2003. That fallout caused Terry to open his venture in Los Angeles and Big Meech to keep his in Atlanta.

What Is Big Meech's Life Story?

Big Meech’s life story is about an American businessman and drug dealer. As a young man, he and his sibling, Southwest T, tried to overcome the financial strains by exploring criminal ventures of narcotics sales to obtain financial independence.

He founded the BMF enterprise and controlled it with his brother. Between the early 1990s and mid-2000s, they bought real estate, multiple cash outlets and accounts, over 30 luxury cars comprising Bentleys, BMWs, Royces, and designer jewelry.

He was convicted and incarcerated in 2008 for his and the BMF's fraudulent activities with 30 years of jail time.

What Is The Rise and Fall of the Black Mafia Family?

It is an hour-long biopic look at the Flenory brothers, Demetrius Edwards "Big Meech" and Terry "Southwest T." It delves into their background and careers as record label producers and drug moguls from the late 1980s to the early 2000s.

Big Meech’s story shows that while you can get rich from a life of crime, it’s certainly no way to create lasting wealth and independence.

The best way to become a millionaire is through entrepreneurship. We aim to create one million millionaires by 2028. The best way we know to build generational wealth is to build and sell million-dollar brands, and invest the profits wisely.

If you’re ready to start your journey on the road to $1 million, the first step is finding the perfect business to start this year. We’ve created a free video series for you to help you find YOUR perfect business. Check it out here.