Emma Chamberlain Net Worth: How She Earned $12 Million at 21 Years Old 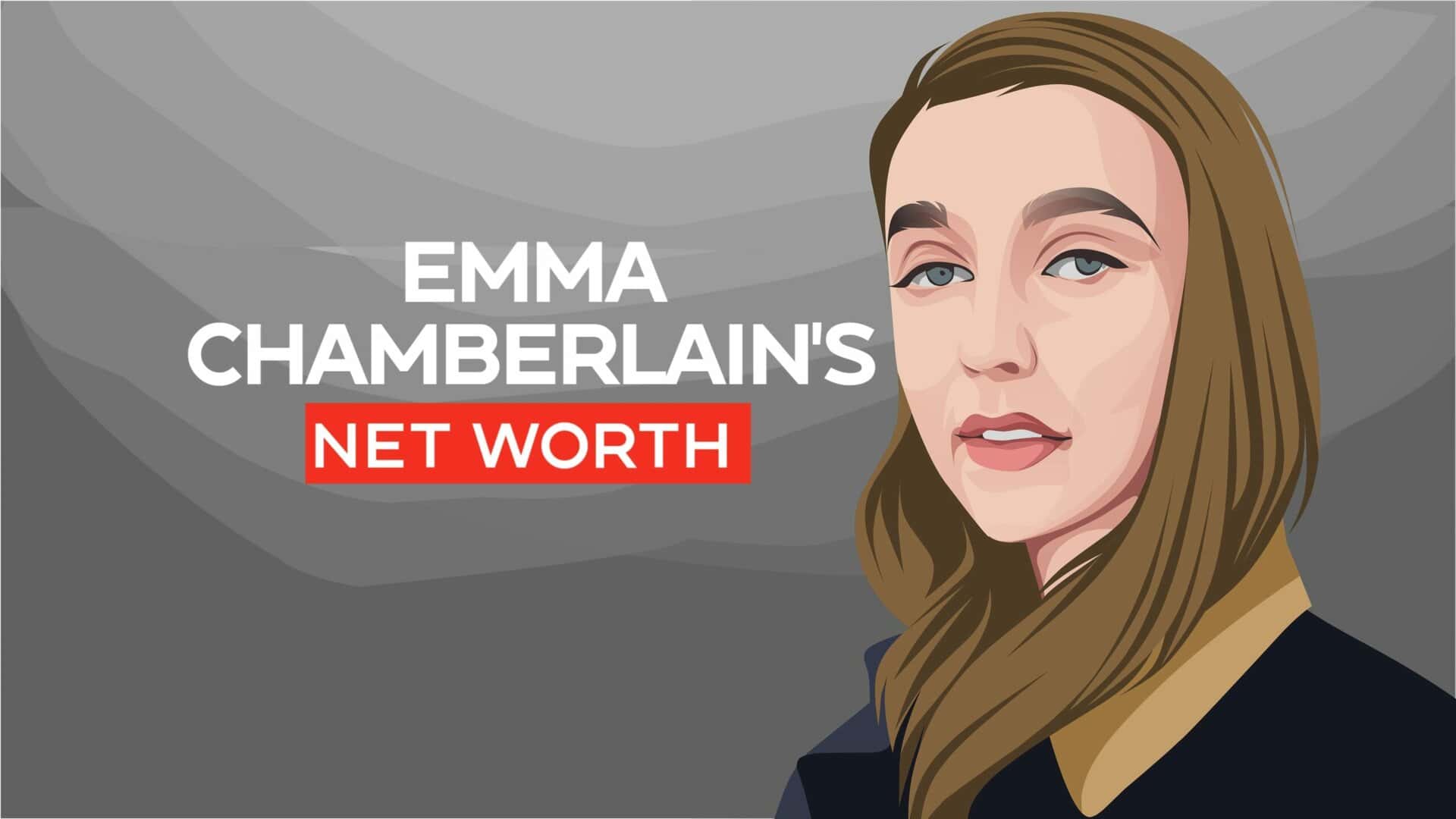 Emma Chamberlain is an American YouTuber, podcaster, and social media personality with an estimated net worth of $12 million.

Since starting her social media career in 2016, she's amassed a huge following for her YouTube vlog, social media accounts, and other projects. She has also parlayed her success into other endeavors, including a clothing line, coffee store, brands, and a podcast.

This guide will show you how Emma Chamberlain's net worth reached $12 million.

What is Emma Chamberlain’s Net Worth 2022?

Emma Chamberlain's net worth is estimated at $12 million.

Who is Emma Chamberlain?

Emma Frances Chamberlain is an American YouTuber, content creator, and internet personality. She is one of YouTube's most-recognizable faces after she secured the first-of-their-kind partnership with major fashion houses — Louis Vuitton and Cartier — in 2019.

Emma dropped out of school towards the end of her sophomore year, at 16 years old, and started to pursue her YouTube career in 2017. But she later graduated after passing the California High School Exit Exam.

What are Emma Chamberlain's sources of income?

As of November 2022, Emma Chamberlain (@emmachamerline) has about 12 million YouTube subscribers and over 1.5 billion video views. She started her channel in 2016 but only had active content creation in the summer of 2017 after she dropped school. Her early videos documented travel, lifestyle, fashion, beauty, and DIY projects that didn't capture much attention. Her first viral YouTube video, We All Owe The Dollar Store An Apology, gave her viral news and subscribers. The success was attributed to her unique editing style, defined by zooms, pauses, and adding text to the screen. Many vloggers have mimicked this style over the internet.

Emma Chamberlain is also a podcaster. Initially, her podcast was called Stupid Genius. But she rebranded it to Anything Goes.

Emma is an influencer, thanks to her massive following of 12 million plus YouTube subscribers, over 16 million Instagram followers, and over 6.5 million TikTok followers. Her first big endorsement was in 2018 for the shopping app Dote. She's since worked with major fashion brands like Louis Vuitton, Levi and Dickies, Target, Calvin Klein, and more as a brand ambassador and influencer. She's appeared in several major publications, including Vogue Australia, Allure, Bazaar, W magazine, Cosmopolitan, and Nylon.

Emma Chamberlain designs and sells different merchandise, including T-shirts, sweatpants, phone cases, beanies, posters, stickers, and home decor. She sells her merchandise through her website and other third-party websites.

As an influencer, people, companies, and organizations hire Emma Chamberlain to appear in (private) corporate events, keynotes, personal appearances, speeches, or other performances. Hiring Emma Chamberlain for appearances or tours costs between $50,000 and $100,000.

Emma Chamberlain hosts the podcast Anything Goes, formerly Stupid Genius. This is a weekly series where she makes ongoing conversations about hot topics and current events. In 2023 Anything Goes will be exclusively on Spotify after a multimillion deal between Emma and Spotify.

How much money does Emma Chamberlain make from her coffee store and sponsorships?

Emma Chamberlain earns up to $600,000 by promoting brands and companies through her social media accounts — Youtube, Instagram, and TikTok.

What investments has she made to increase her net worth?

She became a homeowner at 18

At only 18, she bought a house for $3.9 million in West Hollywood, California.

In 2023, Emma Chamberlain is bringing her podcast Anything Goes exclusively to Spotify on a multimillion deal with the audio giant.

Emma started her YouTube channel in 2016. By 2017 she went viral and now has over 12 million subscribers on YouTube, posts videos, regularly promotes brands, and sells her merchandise through the YouTube channel. With over 1.5 billion views, Emma earns an estimated $120,000 to $2 million a year on YouTube alone, without the revenue from endorsements and other businesses.

Emma Chamberlain sparked the Met Gala 2022. She wore Louis Vuitton and dripped in a mysterious diamond necklace at the Met Gala 2022, along with her expensive vintage tiara. This got people talking.

She invested in A360 Media LLC

Emma Chamberlain has invested in A360 Media LLC and owns part of the magazine's stock.

To improve her visibility and increase her net worth, Emma Chamberlain also invested in Celebsquery.

How can other entrepreneurs learn from Emma Chamberlain's success story?

Success requires a focus on one niche where you can prosper and succeed. Emma focused on unique videos for her YouTube channel, great humor, wit, and voice for her podcast, and coffee passion for her coffee store.

Leverage the power of social media to reach a wider audience

Emma has a huge following on social media — 11.8 million subscribers on YouTube, over 16 million Instagram followers, and over 6.4 million followers on TikTok. Her massive following gives her a wider audience for her brands and endorsements.

Develop an eye for spotting trends and capitalize on them quickly

Emma uses trends to market herself, brands, and partners she works with. For example, in September 2021, Emma Chamberlain attended the 2022 Met Gala wearing a Louis Vuitton to the Lexicon of Fashion and a diamond necklace.

Take risks and be willing to experiment with different ideas

Emma has taken many risks, like quitting school as a sophomore, buying a house at only 18, launching a podcast and renaming it, starting a coffee store, and more. She's shown risk tolerance and zeal.

Be consistent in content creation and engage with followers

Emma is a consistent content creator. If she's not creating a video on YouTube, she's sharing something on a podcast, Instagram, or TikTok, keeping her fans engaged.

Have a clear vision and strategy for growing your brand

Emma knew what she wanted and talked with her dad about it before she quit school. She went on to conquer her world and create an empire.

Invest in yourself and build a strong team of professionals

You owe it to yourself to succeed as an entrepreneur. But that also depends on how much you love yourself and the team around you. Emma has collaborated with other great vloggers and worked with professionals to create her empire at a young age.

Stay humble and be authentic in all your endeavors

Emma's humble and authentic content type made her video go viral in the first place. Many other YouTubers, including Antonio Garza and James Charles, have replicated her video editing style.

Emma is an astute businesswoman. She manages her finances well and positions herself for growth. Now she has deals with Spotify for her podcast and raised an estimated $7 million for her coffee house.

Learn from the success stories of other entrepreneurs

Finally, learn from other entrepreneurs. Research and learn from their success, then implement your goals and ideas based on evidence and working ideas.

Who is Emma Chamberlain?

What is Emma Chamberlain's net worth?

As per Celebrity Net Worth, Emma Chamberlain's Net worth is estimated to be $12 million.

How did Emma Chamberlain get rich?

Emma Chamberlain is a YouTuber with over 11.8 million subscribers. Most of her earnings come from YouTube. She also earns from brand endorsements, appearances, podcasts, social media content creation, influencers, clothesline, and online coffee store.

What is Emma Chamberlain's career?

What is Emma Chamberlain's coffee company?

What is Emma Chamberlain's fashion line?

What is Emma Chamberlain's podcast?

What is Emma Chamberlain's relationship with the Dolan Twins?

Emma Chamberlain and the Dolan Twins don't talk anymore. The group, which included Emma, the Dolan twins, and James Charles, no longer makes videos together.

Emma Chamberlain lives in a 5,200-square-foot luxury house in San Mateo, California. The house has 5 Bedrooms, 6 Bathrooms, a basketball court, 2 Pools, and loads of natural light.

We’re on a mission to make one million millionaires by 2028. If you want to start a business that makes the world a better place while also making you very, very wealthy, we’d love to help you, too. The first step is figuring out what business is a great fit for you. That’s why we’ve created this free video series to help you find your million dollar idea.