Jami Gertz Net Worth: How Did She Become a Billionaire? 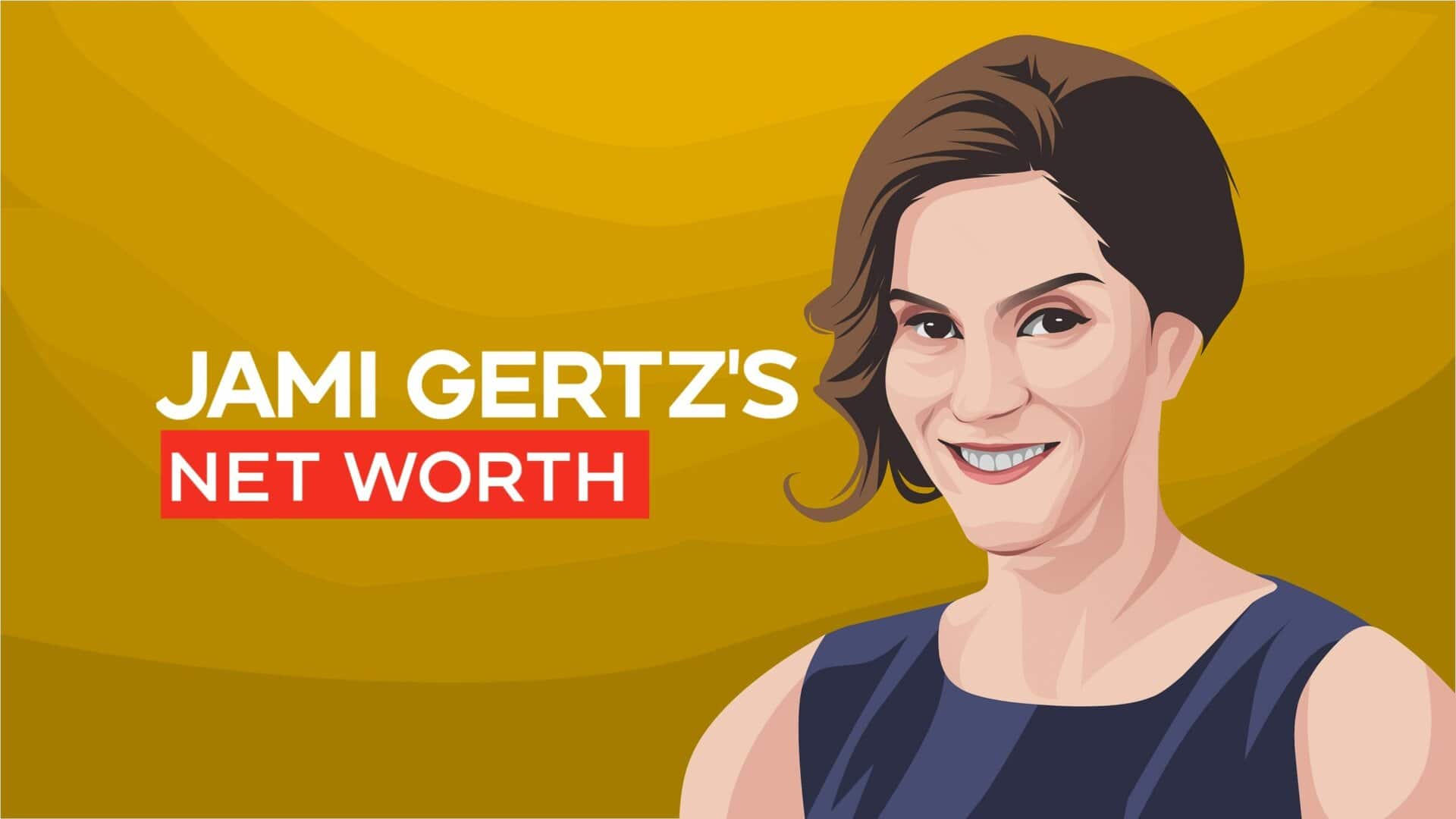 Jami Gertz's Net Worth as of December 2022 is estimated at $3 billion, making her one of the richest women and actors in America. Gertz, originally known for her film appearances in the 1980s, has become a renowned actress, entrepreneur and philanthropist.

She is best known for her astute roles in The Lost Boys and Twister movies, the ABC sitcom The Neighbors, Solarbabies, Quints, Sixteen Candles and the series The Neighbors and Still Standing. And, along with her husband Tony Ressler, she owns NBA's Atlanta Hawks.

But how did Gertz amass her wealth and become one of the wealthiest women on the planet? Let's look at Jami Gertz's worth, assets, earnings and philanthropy.

What is Jami Gertz's net worth?

Jami Gertz's net worth is estimated at $3 billion. Much of her wealth comes from acting, the entertainment industry, business and philanthropy.

Jami Gertz's estimated net worth over the past fives years is as follows:

Who Is Jami Gertz?

Jami Gertz is a successful American actress, entrepreneur and philanthropist. As of December 2022, Jami Gertz's net worth is estimated to be $3 Billion. Born in Chicago, Illinois, U.S. on  Oct 28, 1965. Gertz started her career in T.V. commercials before landing a role on the CBS sitcom Diff'rent Strokes.

Jami is married to Tony Ressler, an American billionaire hedge fund founder, manager and sports team owner. Together, Jami and Tony are part-owners of Atlanta Hawks, an NBA team, and they also own a minority stake in the Milwaukee Brewers.

Jami Gertz was born in Chicago, Illinois, in 1965 and lived in the nearby Glenview suburb. Her parents are Sharyn and Walter Gertz, a builder and contractor. She has two brothers, Scott and Michael. They are all Jewish raised in Conservative Judaism.

Jami attended Maine East High School, followed by NYU for her degree in Theater Arts. She began acting in the early 80s and her first on screen TV role was the 1981 film On the Right Track.

Jami grew up visiting theaters and finding ways to connect professionally with the performing arts. This led her to pursue an acting career.

How Did Jami Gertz Become A Billionaire?

Jami Gertz may be known best for her roles in Less Than Zero and The Lost Boys films, but she has come a long way to become a billionaire! So, how did she become so insanely wealthy?

Though she's had a successful career in acting, most of Jami Gertz's net worth came from her marriage to Tony Ressler, the L.A. based billionaire. Mr. Ressler is the co-founder of Ares Management, a management company with over $136 billion in assets under management. Ressler and Gertz are part owners of two key companies: NBA's Atlanta Hawks and the Milwaukee Brewers. But Gertz clearly didn't marry Ressler for his money because back then Ressler was just an up-and-coming financier.

Jami is best known for her roles in the 1980s films Diff'rent Strokes, The Lost Boys and Sixteen Candles, but those aren't her only movies.

Jami Gertz made her acting debut in 1981 with the movie Endless Love followed by a co-starring role in the sitcom Square Pegs. She went on to gain much attention with memorable roles in other movies in the 80s and 90s such as 1987's Less Than Zero, Sixteen Candles, Solarbabies and a starring role in The Lost Boys. She established herself in Hollywood with other movies like The Facts of Life, Family Ties, Half-Vampire, Dreams and Keeping Up with the Steins.

She enjoyed starring alongside superstar Britney Spears on Crossroads. She also etched out a name for herself with appearances in Little Shop of Horrors and Speed-the-Plow.

Despite a successful career, she moved to France where she worked as a scent designer for Lanvin, a perfume company.

She returned and resumed her acting career in the late 80s and 90s. In 1997 Jami got a recurring role on the television series E.R. as Dr. Nina Pomerantz. She later landed roles  in various television programs such as Seinfeld, Sibs, Shark and Still Standing.

Jami received a nomination for a Razzie Award in 1997 for her role in Twister. Between 2000 and 2002, Gertz had a recurring role as Kimmy Bishop on the T.V. series Ally McBeal. She was nominated in 2001 for an Emmy for Outstanding Guest Actress in Ally McBeal Comedy Series. She returned to this series as a guest star in 2002 in the show's final season.

Between 2009 and 2010, Jami had a recurring role as Marlo Klein on the Entourage series. In 2011, Jami had a memorable guest appearance on the Modern Family television series. She also earned a producers' credit in 2011 on the Academy Award-nominated film A Better Life. Between 2012 and 2014, she had a starring role in 44 episodes of The Neighbors.

Apart from movies and television shows, Jami Gertz is also an accomplished businesswoman and philanthropist. She co-owns an NBA football team, the Atlanta Hawks, has a minority stake in the Milwaukee Brewers with her husband, and owns a media investment company—Southport Lane. She also helps disadvantaged kids access better education through the JAMIkids foundation.

In addition to her acting work, Gertz is also a successful businesswoman and invests in several companies. Jami is the founder and owner of JG&A, LLC, a consulting firm that provides entrepreneurship advice and guidance for start-up companies. She previously co-founded Henry Rose, a lifestyle collection of well-crafted home goods, beautiful accessories and essential apothecary items. She advises many high-profile tech companies, including Zinc Health as Strategic Advisor on Women's Health Initiatives and [email protected] Ventures as an Advisory Board Member.

What Are The Key Investments That Made Jami Gertz's Wealth Grow?

Jami and Tony have primary homes in Malibu and Beverly Hills. The Beverly Hills home is in the Hill's most exclusive gated community, at the top of a mountain and 360-degree views of L.A. Their neighbors included Sylvester Stallone, Denzel Washington, Eddie Murphy and Mark Wahlberg. It's estimated at around $60 million. Their Malibu home in Broad Beach is one of the area's most desirable parts.

Gertz has been married to Tony Ressler since 1989, and they have three children. A year after their marriage, Tony co-founded their private equity firm Apollo Global Management and in 1997, he founded Ares Management. Apollo is estimated to own over $300 billion in assets under management, while Ares is estimated to have over $136 billion. The Resslers ownership is estimated to be around 33% of Ares's equity.

What Are Some of Her Philanthropic Activities and Charitable Donations?

Apart from her acting and business ventures, Jami Gertz is also an astute philanthropist. Some of her philanthropic activities and charitable donations include the following:

How much is Jami Gertz worth?

Jami Gertz is estimated to be worth $3 billion.

How did Jami Gertz become a billionaire?

Jamie Gertz is a career actress. But she's also a businesswoman with many business ventures and a philanthropist. Most of her billion income comes from her marriage with her management consultant husband. Together, they're part owners of the NBA's Atlanta Hawks, have a minority stake in the Milwaukee Brewers and have real estate in Malibu and Beverly Hills.

What are some of Jami Gertz's most famous roles?

Gertz is known for her early 1980s roles in the films Crossroads,  Less than Zero, The Lost Boys, Quicksilver, the T.V. series Square Pegs and 1996's Twister. She's also played Judy Miller in the CBS sitcom Still Standing and Debbie Weaver in the ABC sitcom The Neighbors.

What is Jami Gertz's net worth?

What is the Salary of Jami Gertz?

What are Jami Gertz's earnings?

Considering how her movies have grossed millions, Gertz's salary must have been significant. An actress, she earned an average salary of $103,388 annually. Her current monthly income is $250+ million and her monthly income is about $20+ million.

What are Jami Gertz's assets?

Jami and Tony have primary homes in Malibu and Beverly Hills. The Beverly Hills home is about $60 million. Their Malibu home is in Broad Beach. She also co-owns the Atlanta Hawks NBA football team and has a minority stake in the Milwaukee Brewers with her husband.

What is Jami Gertz's philanthropy?

Jami Gertz is also a generous philanthropist. Some of her philanthropic activities and charitable donations include:

What is Jami Gertz's height?

What is Jami Gertz's weight?

What is Jami Gertz's ethnicity?

Gertz is Jewish,was raised in Conservative Judaism, and is a practicing Jew.

Jami Gertz is a highly successful actress who has also managed to parlay her success into a successful business career. With an estimated net worth of $3 million, she's one of the richest women in the U.S. and a successful businesswoman. Overall, Jami Gertz exemplifies success, entrepreneurship, and philanthropy. Her inspiring success story serves us all a reminder to never let self-doubt cloud our future potential. Here at Capitalism.com, we’re on a mission to make one million millionaires by 2028. We do this by coaching our students as they build million dollar brands they can one day sell for a life-changing payday, and then invest their profits to create vast wealth for generations to come.