Larry Page is an entrepreneur whose net worth trajectory began with the creation of Google and continues with many other investments. He and his business partner, Sergey Brin, have written themselves into history by creating the largest search engine. They are now some of the wealthiest people in the world! Keep reading to learn more about Larry Page's net worth, his journey creating Google, how he invests in real estate and other businesses, as well as other facts about his life.

To the surprise of many, the Google co-founders didn't even like each other when they first met while attending Stanford. They became close friends over the course of a few years (and later became partners that would rewrite history).

Together, they developed the PageRank algorithm, used to determine the importance of web pages. Google still uses this algorithm to this day! Larry Page played a significant role in the discovery that using the relevance of backlinks could help create a superior search engine algorithm. As crazy as it seems, they built this sophisticated algorithm from Larry Page's small dorm room. They took spare parts from cheap computers to create a device to connect to their new search engine.

Google was actually "BackRub" in the beginning, but they changed it to "Googol," then eventually finalized the name as Google. The first version became available on the Stanford site in August of 1996 and quickly became popular among Stanford students. As it grew, it required more servers to manage.

At this point, they tried to sell their idea for $1 million to various companies. This failed, so they looked for Angel Investors. Once they found Andy Bechtolsheim (former vice president of Cisco Systems), who invested $100,000, they dedicated their lives to creating Google.

The Growth of Google

Larry and Sergey built Google over the next few years. By 2000, Google had indexed one billion URLs. At this point, they had taken a $1 million loan from friends and family to move into a new office in Mountain View. Google continued to grow quickly and held its initial public offering in 2004. At this point, Sergey and Larry Page's net worth shot up into the billions.

To this day, Google receives billions of searches daily, and its algorithm is continuously evolving.

In 2015, Larry Page and Sergey Brin announced the creation of Alphabet, a new parent company to oversee Google and other subsidiaries. The two partners became Alphabet's CEO and president, with Sundar Pichai as Google's top executive. Pichai became the new CEO when Page and Brin stepped down.

How Much Does Larry Page Make in a Year?

While working at Google, Larry Page technically took home a $1 yearly salary. Although he is no longer CEO, he is still worth billions due to his significant stake in the company. 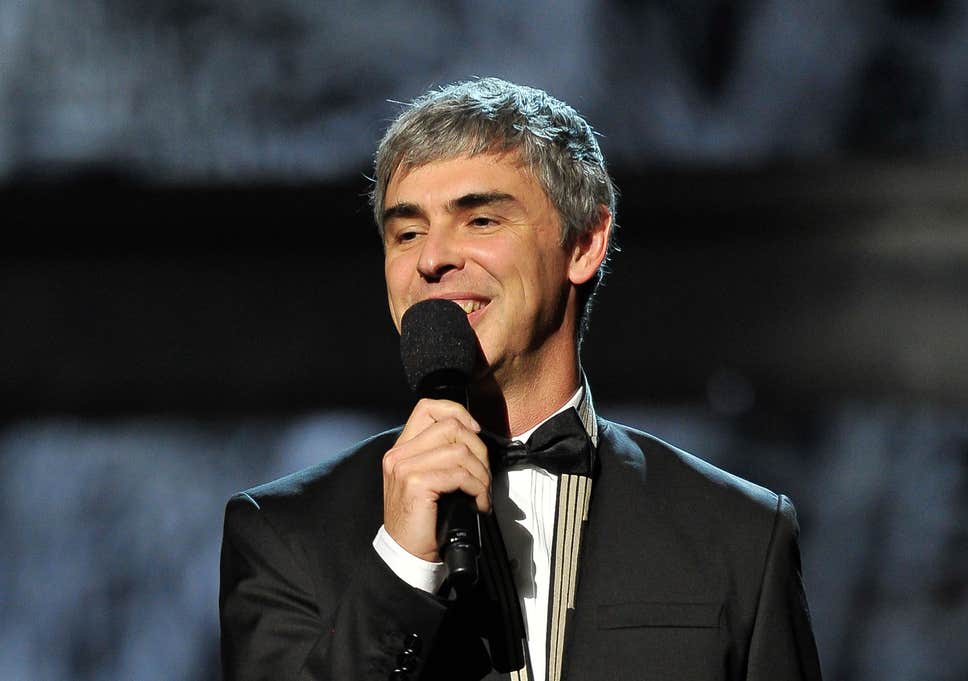 Who is Google Owned By?

Alphabet owns Google. To this day, Larry Page has a 6% stake in the company. He acted as the Google CEO for years before stepping down in August 2001, then returning in 2011 and eventually transferring to the CEO of Alphabet. He stepped down again in 2019, and Sundar Pichai (net worth of $600 million) took his place. Sergey Brin stepped down as well, claiming that the company was established and did not need two CEOs.

What is Google's Net Worth?

Forget about building a million-dollar business – Google is worth around $300 billion. Alphabet, Google's parent company, is worth around $900 billion, competing with Apple and Amazon for the most valuable businesses in the world. Alphabet owns an array of companies that they have purchased or created over the years.

Does Google own Amazon?

No, Google does not own Amazon.

Yes, Google purchased YouTube for $1.65 billion back in November 2006.

Does Google own Waze?

As you can see, there are quite a few large companies that Google (technically, Alphabet) has purchased. A few other examples include Fitbit, Nest Labs, Motorola Mobility, and DoubleClick.

The Google co-founder also invests in a few other tech companies. For one, Larry Page is a founding investor in Planetary Resources, a space exploration company. Page is also a good friend of Elon Musk (the founder of Tesla) and has invested in his company. In one interview, Page said he would leave his entire wealth to Elon!

Larry Page has also invested in flying car startups Kitty Hawk and Opener. Kitty Hawk has begun a certification process on a fully electric, self-piloting flying taxi in New Zealand. The company has been testing and aims to have a commercial network of vehicles available by 2021.

When Did Larry Page Become a Billionaire?

Once Google took over the world, Larry Page began building his dream home. He purchased a 9,000 square foot Spanish Colonial Revival house in Palo Alto in February of 2005 for $7.2 million. Pedro Joseph de Lemos designed the 6-bedroom, 6-bathroom home in the 1930s.

Within a couple of years, they began acquiring adjacent homes like many millionaire and billionaire celebrities tend to do. He tore down these homes and donated the materials, then built a 6,000-square-foot eco-friendly paradise.

Larry Page's house has an elevator, plenty of solar panels, a rooftop garden, and permeable paving. The structure used organic architecture building materials. For example, they used low volatile organic compound paint. The exterior has zinc cladding and a vast array of windows. Larry Page even worked with an arborist to replace trees in bad health with others that used less water to maintain.

Unfortunately for those of us who are curious, Larry is pretty secretive about how his massive homes look inside. What Does Larry Page Spend His Money On?

With billions to spare, it's not a surprise that he has his indulgences. We're surprised he hasn't indulged more!

For one, Larry Page owns a couple of private jets with Sergey Brin. They own a customized Boeing 767-200 and a Dornier Alpha Jet. Google also has its own San Jose private airport worth $82 million, which they built in 2014.

With billions to spare, why wouldn't you take lavish vacations? For one, Larry Page and Sergey Brin host an exclusive Google Camp in Sicily at Verdura Resort every year (only elite celebrities get invited). It costs $2,000 for one night for a 1-600-square-foot villa. The resort has two golf courses, a 200-foot infinity pool, and a private coastline. They also reportedly vacation in Fiji. On a side note, Larry kiteboards in his spare time.

Larry Page purchased a $45 million superyacht in 2011 that spans across 193 feet. It was created to explore the world's oceans in comfort and was built in Germany. The yacht features a stabilization system that reduces the free surface effect, resulting in a smoother cruising experience. It has six decks, a gym, a Jacuzzi, and plenty of other features.

Since Larry Page is an environmental advocate, he doesn't seem to have a portfolio of luxury cars like many billionaires do. Since Larry Page and Sergey Brin led an investment round of $40 million in Tesla, you might imagine they both drive Tesla Roadsters, costing over $105,000. Surprisingly, Page also owns a Toyota Prius, the world's first mass-produced gasoline-electric hybrid car. It only costs around $30,000.

Aside from his minimalistic car collection, Larry Page owns a Zero X. This is an electric vehicle from Zero Motorcycles that only costs around $7,500. It reaches speeds of 60 mph and can hit 30 mph in under two seconds. It only takes two hours to recharge. Larry purchased three of these bikes!

In addition, Page is heavily involved in the creation of flying cars, as we mentioned above (he funds three flying car companies). Perhaps he will completely change the world again by helping make flying cars accessible!

How Much Are Larry Page and Sergey Brin Worth?

Together, they are reported to have a net worth over $100 billion!

Larry Page's wife is a biomedical informatics research scientist named Lucinda Southworth. They were married in 2007 on Richard Branson's private island (Necker Island). For their wedding, they flew about 600 people to the island, including guests like Oprah Winfrey and Donald Trump! They have two children together, one was born in 2009 and the other in 2011.

He was born on March 26, 1973, in Lansing, Michigan. His father earned his Ph.D. in computer science and was a professor at Michigan State University. Similarly, Larry Page's mother was an instructor of computer programming at Lyman Brigg's College of Michigan State University. Although Larry doesn't publicly declare a religion, his mother is Jewish.

Larry got to play with computers at a young age, which piqued his interest.

Plus, his home was always scattered with computer science magazines. He always knew he was going to be an entrepreneur and start a company. As you may have guessed, Larry Page's education followed in his parents' footsteps. He got his bachelor's degree in computer engineering at the University of Michigan, then later received his computer science master's degree from Stanford University. It's not surprising that Larry Page has donated billions to various causes and created his own family foundation as well. For one, he has donated over $20 million to a vocal-cord nerve-function research program at the Voice Health Institute in Boston. He chose this cause because he has suffered from a vocal cord issue for 14+ years.

Additionally, Larry Page's family foundation (the Carl Victor Page Memorial Fund) donated $15 million to the Ebola epidemic in Africa. He has also donated millions to his family fund. In total, Page has donated $38.5 billion over the past 20 years.

Larry Page's net worth is incredible and continues to rise as Google grows even more substantial. When combining his net worth with Sergey Brin (the other founder of Google), they are worth nearly the same amount as the richest man in the world, Amazon founder Jeff Bezos. Even though Larry has created more than enough wealth to retire, he continues to work towards changing the world using technology (including flying cars and environmentally friendly causes).

Of course, you don’t have to invent a search engine that changes the entire world to make a huge impact in people’s lives as you take ownership of a problem, create a solution, and serve people. In fact, many of the entrepreneurs we’ve worked with started with less than $1,000. Want to see how they did it? Check out this free training.