As of 2021 at the age of 63, Grant Cardone's net worth figure is a reported $300 million. Known for his massive real estate empire, he’s also a sales coach, author, and motivational speaker. His rise to fortune and fame was met with many obstacles yet his perseverance and devotion to make a deal let him be the business mogul he is today.

A few quick notes on what Grant's become:

In Grant Cardone’s own words he, “...grew up poor.” Born on March 21, 1958 in Lake Charles, Louisiana, he was one of four children - one of which is his identical twin brother, Gary. Losing his dad at the age of 10 began a spiral of troublesome behavior. As Grant explains, after his father died he had no male figure to look up to anymore. He recognizes that he had people who were equal to him or less than him.

Grant’s life as a teen is certainly not reflective of the adult he later became. His teenage years were marred with drugs and alcohol. In and out of school due to detention and suspensions, Grant managed to graduate from high school. He later went on to graduate from McNeese State University in 1981. Grant would later be awarded the Distinguished Alumnus Award from McNeese in 2010.

Grant Cardone began his career after college working for a sales company. He lived in Houston, TX, LaJolla, CA, and Los Angeles. Within this timeframe, he developed a bad drug problem which led him to do a stint in rehab. Upon leaving rehab at age 25, Grant had a new lease on life. He hated his sales job but hated being broke even more. He also knew that having that job kept him busy and focused so he didn't have time for drugs. Grant became a millionaire within the next five years while working as a car salesman and investing in real estate on the side.

“Your greatness is limited only by the investments you make in yourself” - Grant Cardone.

Before the Real Estate

Grant Cardone’s first business was a consulting business. He worked with car dealerships and manufacturers in the United States and Canada. The goal was making their sales processes more consumer-friendly, efficient, and profitable to end up with happy customers and dealers. Grant wanted to disrupt the auto industry and the auto industry paid him to do it along the way. He consulted while still working in auto sales until he had enough money to invest in his second real estate investment. 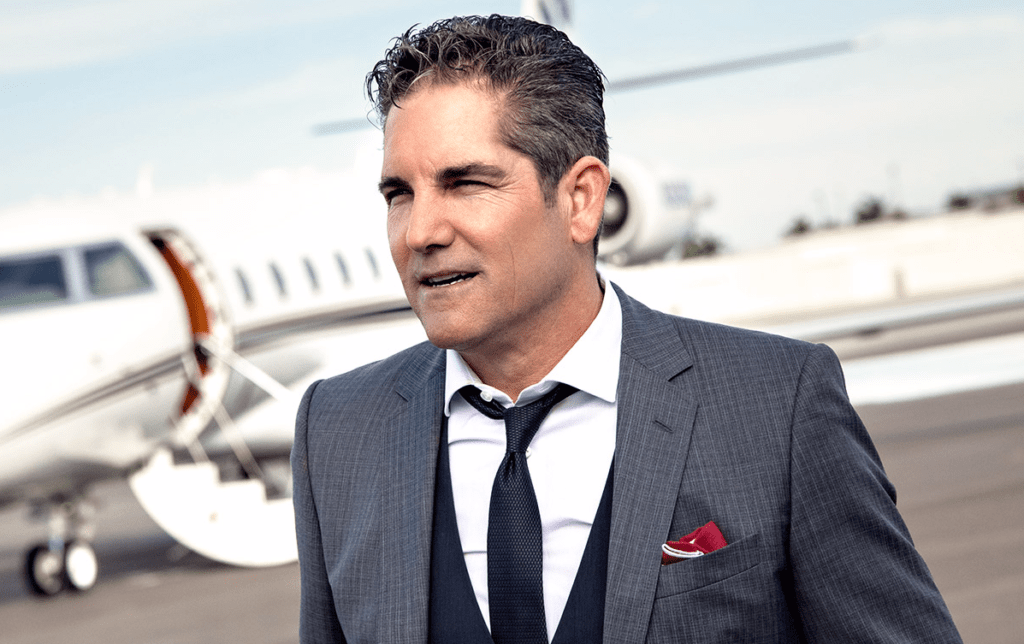 Grant Cardone’s Net Worth from Investing in Real Estate

While a car salesman, Grant Cardone invested in his first property, a single-family property in Houston. After renting to tenants for seven months, they left. Grant Cardone’s cash flow dried up. This would be his first lesson in real estate.

He never wanted to depend on one tenant for income and cash flow. It was five years later but he decided his next property would be a multi-family complex in San Diego. A month after his first multi-family purchase, he bought his second property. His strategy was to use money from the first two to fund the third.

Grant continued to use this strategy and slowly acquired more and more property. By 2012, Grant Cardone’s company was said to have the largest private party acquisitions in Florida - especially for multi-family property. Today, he owns 4.500 apartments.

Grant Cardone is now the owner of Cardone Capital, Cardone Training Technologies, Grant Cardone TV, and Grant Cardone Sales University, which all amass multi-millions, annually. His companies reportedly own and control $800 million worth of investment properties in the United States. His multi million dollar real estate empire covers Alabama, Arizona, California, Florida, Georgia, North Carolina, Tennessee, and Texas. With Grant's "be obsessed or be average" motto, Cardone Capital is sure to grow and expand further.

Cardone notes in interviews that his holdings are solely owned by him except a little less than 2% of his real estate portfolio which is owned by outside partners, including family and friends. He keeps his company close and tight. Most of his portfolio is financed with debt from banks and investors. He believes debt is good and money is a tool to trade for freedom. Grant Cardone's net worth stems largely from leveraging debt. He pays it off with profits from monthly revenues.

Grant became introduced to television early when he was featured on Joan Rivers’s show, “How’d You Get So Rich”. In 2011, Grant helped to develop a show for National Geographic called “Turnaround King.” In it, he visited failing businesses and would then give advice and action steps to get their business profitable. He and his wife currently produce a web series called “The G & E Show”.

Grant can be seen as a regular on-air news personality on business news outlets such as Fox News, CNBC, Fox Business, and MSNBC. Grant is also a regular contributor for Entrepreneur.com, BusinessInsider, CNBC, AmexForum, and GCTV.com. Forbes named Grant Cardone #1 of the 25 Marketing Influencers to Watch in 2017.

Cardone spoke at one of Capitalism.com's past events, Freedom Fastlane Live.  His keynote covered what it looks like to 10X everything in life and business, acquiring hundreds of millions of dollars in property, and playing in the business big leagues. The entire keynote is embedded here!

From writing books and programs, The 10X Rule was born. It is a wildly popular stand-alone brand created by Grant Cardone. The book is solely based on the idea that you should figure out what you want to do. Then you multiply the effort it will take to get there by ten. This relates to business, relationships, family, and money.

Grant hosts a yearly three-day conference for business owners and entrepreneurs that reflects the principles of the book. The conference claims to change mindsets and behaviors that give people the confidence to up-level their lives. This conference covers topics such as sales, marketing, creating a dream life, branding, and more. It challenges sales and marketing gurus to up their game ten times more than what they currently give to their profession.

Speakers that have graced the stage at this event are Steve Harvey, Tai Lopex, Sarah Blakely, Daymond John, Russell Brunson, Bethenny Frankel, and many more. They tell their stories of accomplishing life goals and how you, too, can do the same.

“Approach every situation with an “in-it-to-win-it-whatever-it-takes” mind-set. Sound too aggressive? Sorry, but that is the outlook required to win nowadays.” – Grant Cardone

Grant Cardone is married to Spanish actress and model, Elena Lyons. Together they live in Sunny Isles Beach, Florida with their two daughters, Scarlette and Sabrina Cardone. Grant Cardone is a well-known family man. When asked how he makes time for everything - he always mentions his family first. It's obvious that he knows this question is directed toward his time with his family among all of his responsibilities spread across all his businesses. Today, Grant Cardone will tell you that he writes down everything that he wants to succeed at and then obsesses over it. His family is on that list. He is committed to being a great father and husband. Grant is very creative in how he uses his time with his businesses and family so he can make it work for them.

Time with Wife and Kids

As a father, Grant Cardone spends his morning with his kids. They usually spend time out of the house at a local coffee shop or breakfast spot before school and work. This gives his kids quality time and stability with their father. He even takes them with him to the gym. He purposefully makes time for them in his life. Pictured: A recent photo of Grant and his wife Elena, with their two daughters Scarlett and Sabrina.

He and his wife work together so that makes it a little easier. Their work together is intentional and rewarding. They both work on projects that play to their own strengths. This creates individuality while still working and playing together.

Grant Cardone is a known Scientologist and doesn’t shy away from his affiliation to the organization. He credits Scientology with improving every area of his life including his relationship with money and even his physical well being. He still believes in God and still practices his Catholic faith. But Cardone makes it known that the courses from Scientology have provided him with focus and a centered well being.

“There are some investments that have zero risks and can guarantee a return on your investment every time. Investments in myself have always paid off.” - Grant Cardone

Own a House and Car?

Most Americans go into debt to buy a house and a car. According to Grant Cardone, those are silly purchases.

“Don’t believe the fantasy of ownership. Rent a house and lease a car.” - Grant Cardone

While he gives this advice, Grant Cardone's net worth currently includes several homes and several cars. His argument for his owning these “luxury” items - he earned the right to own them. His threshold for buying a house and car is If you haven’t made millions of dollars then you should not purchase a house and car with your hard-earned money.

Grant Cardone In Jail or Bankrupt?

In an April 2020 video, Grant released a video saying he was preparing to file bankruptcy. In this video, he said he'd lost everything. The jet, the cars, the condo, the apartment complexes, the watches, even his employees (except for one or two), and wife were all going or gone. He joked about possibly being headed to prison - but of course, it was all an attention-grabbing marketing ploy.

That wasn't the first time Grant pulled a publicity stunt like this. A while back, Grant Cardone published this clickbait video pretending he was going to jail.

He later published a video saying his bankruptcy announcement was just an attempt to break into the news cycle.

Grant Cardone's net worth hit astronomical heights but started from humble beginnings. His cavalier advice on buying and selling is reflective of his humble beginnings. Tragedy followed by adversity could have held him back. So it's quite possible that after his stint in rehab, a new look on life presented itself with more possibilities than he had ever imagined before. He travels the world for motivational speaking, sales training or even to cut a new real estate deal. It seems he plans to live by his mantra of staying lean, being nimble, working hard, making hard decisions quickly, and of course, having fun.

“Speed is the currency that you want to maximize on today. Most people just go too slow. They think too long and they never take any action.” – Grant Cardone

Of course, Grant's approach isn't everyone's cup of tea. In social media and on-stage, he famously quips, "Don’t be a little b****… champions dominate." That's not the only way to create wealth. For entrepreneurs who want to grow a business they love, creating solutions to solve problems for people they serve, doing business can actually be fun. The entrepreneurs in the Capitalism Incubator get a head start because they have access to the business ideas, funding, influencers, and connections they need to build something big. You can find out more and submit your application here.

If you're already in the process of building wealth and own a million-dollar, you might also want to take a look at The One Percent. It’s where entrepreneurs go to learn how to invest their profits so they can live life on their terms. Check it out and, if it looks like just what you’ve been missing, join us.