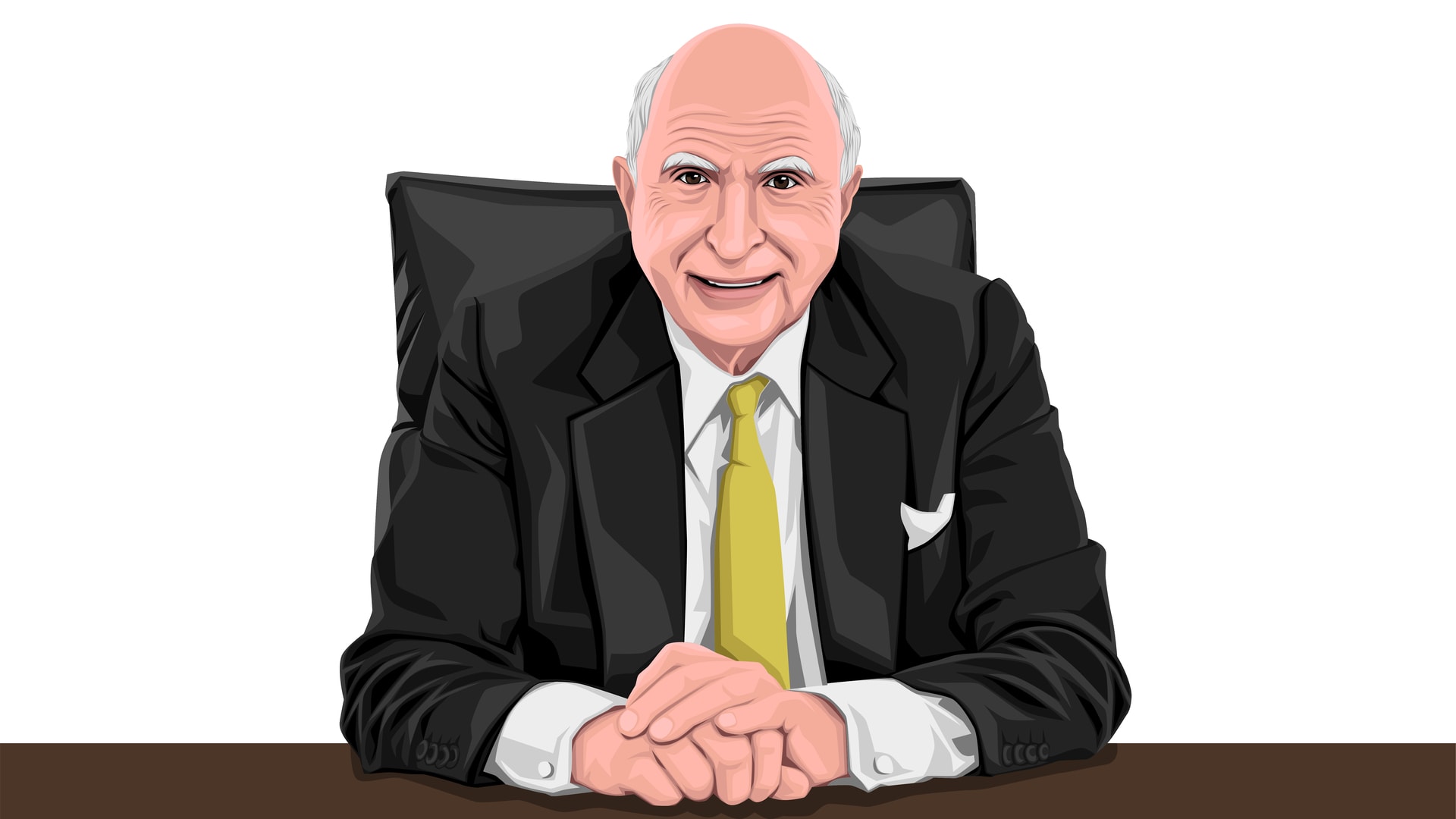 $300. That was the amount Ken Langone needed to finish paying for his final semester at Bucknell. But he didn't have it. He and his wife, as he recalls, were as poor as church mice. Without the money, he would have dropped out.

Luckily for Ken, the dean's assistant graciously lent him the money. Although he repaid the loan a long time ago, he still feels indebted to his alma mater.

The ROI for that meager $300 loan is something Bucknell University will never forget. Today, Ken and his wife—both alumni—remain the school's biggest donors.

Here's how a $300 loan helped a student co-found one of the biggest brands in the DIY industry without forgetting his humble beginnings.

A Long Island Boy with an American Dream

Ken Langone made his grand entrance into the world on September 16, 1935. His Italian-American parents were working-class citizens. Neither of his parents went to high school. His dad worked as a plumber, and his mom was a cook in a school cafeteria. Money was tight, to say the least.

Growing up in a paycheck-to-paycheck home helped instill the value of a dollar in young Ken. As soon as he was old enough, he began picking up odd jobs to support his family.

"As a little boy, my first job was delivering newspapers, and then I had a variety of different jobs. I worked in a butcher shop. I worked in a supermarket. Then I worked in construction. I dug ditches on the Long Island Expressway in 1954, 1955, 1956."

Hard work became a way of life for Ken. But deep down, he knew there were bigger, better things out there. After all, he lived in America, and he wanted to experience the American Dream for himself.

From Wall Street to Entrepreneur

In the early 1960s, Ken began his first white-collar job for a Wall Street financial services company. He was very successful and quickly moved up the corporate ladder. Ross Perot took a liking to Ken. In 1968, Perot put Ken in charge of the IPO for his company, Electronic Data Systems.

Wanting to work for himself, Ken formed his own venture capital firm, Invemed, in 1974. This decision would put in on a DIY trajectory to success.

In 1978, Ken met with Bernie Marcus for breakfast. However, this meeting was about much more than eggs and bacon. Bernie had just lost his job at Handy Dan, a home-improvement chain, and he wanted to vent to Ken about how poorly upper-level executives had treated him.

That meeting sparked a lightbulb moment. What if Ken and Bernie started their own home improvement company?

Along with a third co-founder, Arthur Blank, Ken and Bernie began brainstorming a warehouse-sized store stocked full of discounted goods. It would be a place where the general consumer could buy everything they needed to transform their home.

Ken never wanted to be a silent partner. When he co-founded Home Depot, he worked his tail off to obtain funding and open stores. As someone who came from a lower socioeconomic class, he wanted to treat every employee well.

Income inequality is one of the greatest problems in the U.S., according to Ken. While he doesn't necessarily believe in a government-imposed minimum wage, he also knows people can't survive on $20,000 a year.

Ever since the first Home Depot location opened, Ken has never paid an employee minimum wage. He always pays more. Competitive wages ensure the best workers stick around for the long haul.

"At Home Depot, we have 3,000 kids who started with us entry-level, which means in the parking lot pushing carts. These kids didn't go to college. But they stayed with our business and worked hard, and 3,000 of them are multimillionaires today. That's capitalism. That's how it's supposed to work."

How Did Ken Langone Make His Money?

While co-founding Home Depot made Ken Langone wealthy, it's not the only way he earns a living. Even as a co-founder, he's never owned more than 15% of the company. How did this regular guy become a billionaire? In Ken's own words, "I'm a stockholder. I own a lot of stocks."

Ken enjoys raising money and funding companies. The thrill of the hunt is something he never wants to give up. In an interview with Barron's, he said, "I'm 83 [now 85], and I'm still looking for my next deal, not because I need more money; I like the hunt."

Despite a more than fruitful salary, Ken is still tight with his money. Frivolous spending isn't his style. Instead of spending money on Starbucks, he'd rather just get a cheap cup at any greasy spoon diner. He even has a reputation for calling up the cable company if he thinks the bill is too high. As he stated to CNBC, "I don't think there's anything inconsistent with having been successful and also being frugal."

Does Ken judge other people for spending money? No. Even he occasionally splurges to spoil his family. And he doesn't care what anyone else does with their hard-earned cash either. "I don't think it's my lot in life or my right to judge how somebody else spends their money."

What Is Ken Langone's Net Worth?

It's only natural to wonder how much money Ken brings home in a year. Well, unless you're Ken. Ask him how much he's worth, and you'll get a blunt response. "I don't really know, and I don't care what I'm worth."

But for those who do care, Ken Langone has an estimated net worth of $4.7 billion.

A Family that Gives Together

Ken Langone married the love of his life, Elaine, over 60 years ago. The couple has three children. As a devout Roman Catholic, Ken Langone has always believed in charity. Even though he lives a very frugal life, he's not afraid to open his wallet for philanthropic causes. As he told The Philanthropy Roundtable, "We [Ken and Elaine] realized how good fortune had shined down on us, and we felt like this was something we should do." Some organizations the couple has supported over the years include:

Ken is also a supporter of The Giving Pledge, a movement devoted to inspiring billionaires to give away half of their net worth.

Giving Back: Ken Langone and NYU

As an alumnus of NYU and a former teacher, the university holds a special place in Ken's heart. Since 1997, he's served as a trustee and became chairman of the medical center's board in 1999. Ever since he accepted that $300 loan to finish school, he's remained indebted to it. He's been a prominent NYU donor for decades.

In 1999, Ken and Elaine Langone donated an unrestricted $100 million to NYU Medical Center. He made a matching donation in 2008. That same year, the university renamed it the NYU Elaine A. and Kenneth G. Langone Medical Center in honor of the couple's generous contributions.

In 2018, Ken discovered the incredible amount of debt students incurred to attend medical school. He spoke with a pediatrician who was still repaying her student loans 30 years later. The same woman also believed she would die in debt helping her son pay for medical school at NYU. Her story struck a nerve with Ken.

Doctors and nurses are vital professions. Ken believed schools should do everything possible to foster med students, not dissuade them. He decided to donate another $100 million to NYU. However, this time, the funds would make medical school free for all students—a gift worth more than $200,000 per student.

What Are Ken Langone's Political Views?

Ken is a longtime Republican and a top donor to the party. That doesn't mean he always endorses Republican candidates, however. He votes on how a candidate's views align with his own. In 2014, he supported Democrat Andrew Cuomo in his re-election campaign for New York Governor.

What Does Ken Langone Think About Capitalism?

If capitalism had a mascot, there's a good chance it would be Ken Langone. His story is not only inspirational, but it's also an ode to what's possible, thanks to capitalism. He wasn't born into an affluent family. At times, his boots didn't even have straps to help pull himself up. However, he never lost sight of the American dream.

Ken is such an avid supporter of capitalism that he even paid homage to it in his autobiography, I Love Capitalism: An American Story.

Capitalism is a system that works for everyone who wants to participate in it. While some people believe capitalism only helps a select, privileged few, Ken proved otherwise. He grew up in a home that didn't have air in the summer or heat in the winter. Instead of accepting his reality, he set out to change it.

Does Ken feel guilty about making a boatload of money? Absolutely not. But he does believe it's his responsibility to lift others up.

"People should not be punished for being paid lots of money, provided they deliver. It's up to us as capitalists to make sure that the tide does indeed lift all boats. That's our challenge, and that's our responsibility."

It's Time to Lift the Boat

Ken Lagone's story proves anyone can achieve success in a capitalist society. You don't have to grow up with a silver spoon in your mouth, and you don't need any special connections. With the right drive, mindset, and ideas, you can live the capitalist dream and help others achieve their goals in the process.

Capitalism benefits everyone. Entrepreneurs solve problems and help others. If you’re ready to embark on your own entrepreneurial journey, we’re here to help.

Check out these free videos to get started. And when you’re ready to connect with a community full of like-minded, insightful, and encouraging business owners, be sure to join The One Percent. Together, we can change the world.