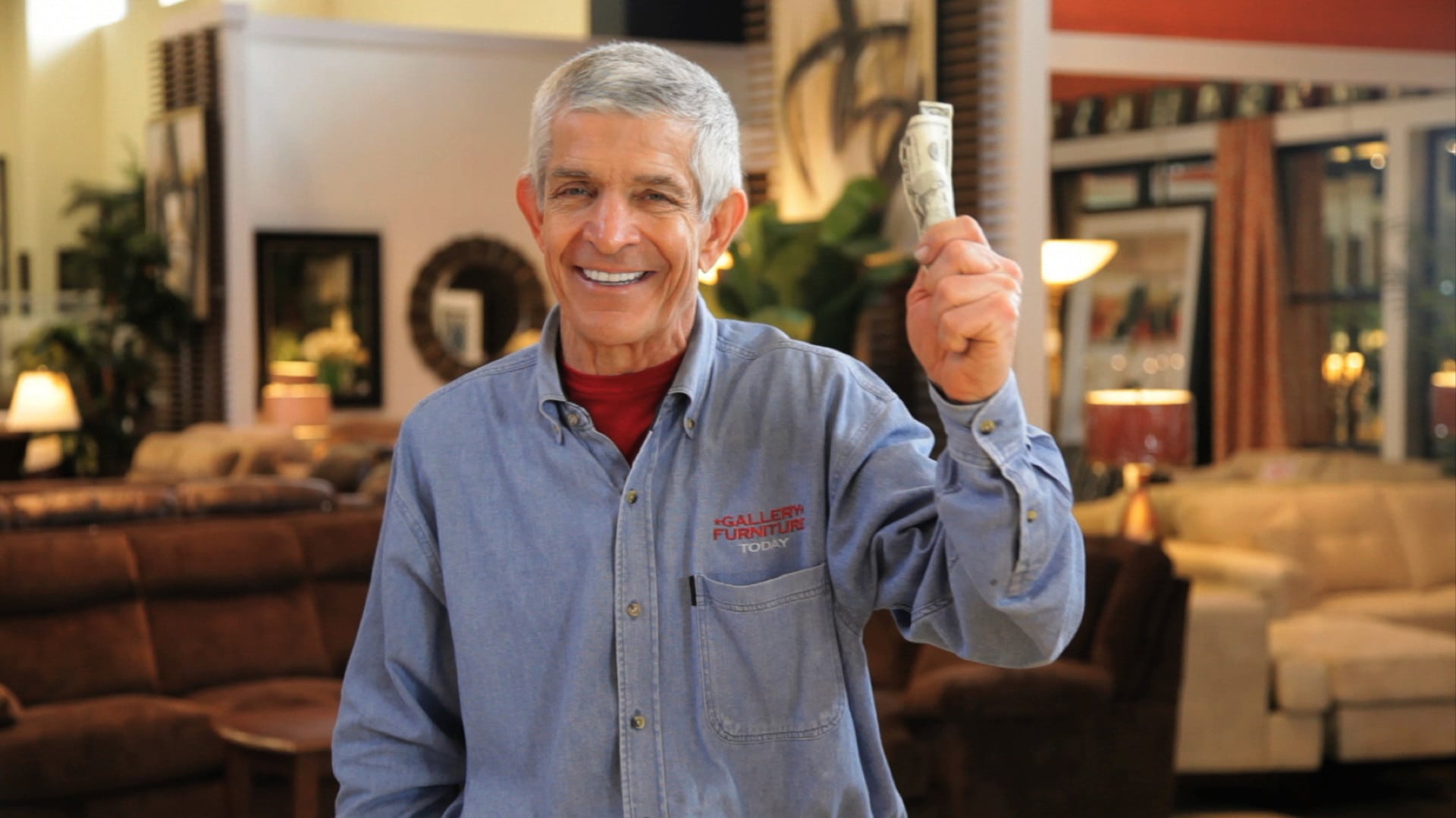 Capitalism with a Cause: The Texas-Sized Story of Mattress Mack

What do you imagine when you think of Texas? Perhaps your mouth waters thinking about roll-off-the-bone barbeque. Maybe you picture strangers greeting you with a friendly, "Howdy!" But if you live in Texas, you know there's nothing more iconic than Mattress Mack, aka Jim McIngvale.

Unfamiliar with this Texas-sized legend? He's an everyday man who turned his passion for selling furniture into a 9-figure empire without turning his back on those in need. After 40 years in the business, it's difficult to tell which is bigger: his wallet or his heart.

Birth of a Texas-Sized Entrepreneur

Mississippian by birth, McIngvale made his grand entrance into the world on February 11, 1951. He was the youngest of four children. Only a few years later, his family packed up and moved to Dallas, Texas. McIngvale recalls a happy childhood and has fond memories of his loving parents. "They were dedicated to their children, their faith, their community, and hard work. They didn't go on vacation without us."

McIngvale was a dedicated student. He enrolled at both the University of Texas and North Texas State University (now known as the University of North Texas). During his college years, he played football to help pay his tuition. Soon after graduating, he landed his first real job at a local convenience store, but the job didn't last long. He got fired. Instead of throwing in the towel, however, he became more determined than ever to make it big.

Shortly after that, McIngvale accepted another job at a local furniture store. Instead of fooling around, he took this job very seriously. He studied the ins and outs of the furniture industry and was a diligent worker. Soon, his passion for selling furniture would ignite an inextinguishable flame to start his own furniture store.

McIngvale only had a pickup truck and $5000 to his name, but he had Texas-sized aspirations. He wanted to make a name for himself and earn enough to support his new bride, Linda. He moved to Houston. With the help of his brother, he founded Gallery Furniture inside an abandoned model home park. Little did he release the impact this decision would have on thousands of Texas in the years to come.

McIngvale never wanted Gallery Furniture to become a fancy store for the elite. Instead, he wanted to sell affordable furnishings to blue-collar workers. A recent boom in the auto, oil, and steel industries ensured there were plenty of families in need of value-priced furniture.

Business was steady at first. McIngvale found himself investing all profits into new merchandise. Sales eventually declined, and he looked for another way to advertise his store. The door-to-door flyers were no longer enough to lure in customers. He needed to think outside the box… or mattress.

McIngvale took the last $10,000 in the bank to purchase advertising spots on two local television networks. These 30-second commercials feature a fast-talking, high-energy McIngvale. He ended every ad with his famous catchphrase, "Save you money!"

The most successful commercial featured McIngavle wearing a Sealy Posturepedic mattress, earning him the nickname "Mattress Mack." Fast forward nearly 40 years, and Gallery Furniture is a well-known Houston landmark. What's the secret to Mattress Mack's long-lasting success? In his own words, "I believe in Capitalism with a cause."

No Houstonian Left in the Cold

In mid-February 2021, Winter Storm Uri devastated Texas residents. Unfortunately, the state's power grid, operated by the Electric Reliability Council of Texas (ERCOT), failed astronomically. ERCOT issued "rolling blackouts" across the state to save the grid from collapsing entirely. As temperatures plummeted below freezing, over 4-million Texans found themselves without power—some for nearly a week.

True to form, McIngvale knew he had to step up and do something. He transformed his Houston Gallery Furniture location into makeshift warming and overnight shelter.

McIngvale went out of his way to provide heat, water, food, and a comfortable bed to anyone in need. He didn't even let the fear of an ongoing pandemic stop his philanthropic ways. As he told CBS Houston affiliate KHOU-TV, "Least we could do is open this furniture store to let people come into a warmer place. Sofas and plenty of available TVs, plenty of available mattresses, and lots of hot food."

Since Texas had about a week to prepare for the storm, McIngvale stocked up on necessary supplies. He purchased 15,000 gallons of diesel—enough to power the store's generator for at least a week. Health was also a priority. Employees passed out masks to everyone and enforced strict hand sanitizing.

Mattress Mack provided overnight shelter to more than 700 Houstonians and served over 3,000 meals. "When my people are dying and freezing, I am going to take care of them. That comes before profit every time."

A Warm Bed Whenever Crisis Hits

CNN asked why he opens his stores to the public during a crisis. McIngvale said, "We believe that we all have responsibility for the well-being of the community. When times get tough, we try to open our doors and let Houstonians come in and regroup."

Mattress Mack doesn't think about the cost or liability before helping others. Instead, he follows his heart and does what he believes is right.

McIngvale has a reputation for making huge sports bets, and Super Bowl 2021 was no exception. He wagered $3.46 million on the Tampa Bay Buccaneers. Why? He had a good feeling about the team. In a news release, McIngvale defended the bet by saying:

"Tampa Bay is loaded with talent on both sides of the ball and led by the greatest football player of all time in Tom Brady, so I'm betting big on the Bucs who have overcome tough matchups throughout this postseason."

Unlike other gamblers, McIngvale promised any winnings would benefit his customers directly. Any customer who spent $3000 or more on a mattress, box spring, or adjustable base would have their money refunded if the Buccaneers won. After winning the bet, he told Mark Berman from Fox 26:

"The happiest thing for me is so many customers were thrilled watching that game with their families. They're getting a free mattress, and they made the right choice buying from us during this promotion. Our customers believe in us and put their faith and trust in us. It doesn't get much better than that. It's a very happy night for me."

Publicity stunt? Of course! But Mattress Mack once again proved he valued customer experience over everything else.

Philanthropy Above Everything Else

McIngvale has more than reaped the rewards of capitalism. He feels a calling to give back to the community whenever possible. As a devout Catholic, he believes it's his duty to do good for others. And he doesn't disappoint.

Throughout the years, he's served over 25,000 Thanksgiving meals and bought 10,000 toys for needy children. Gallery Furniture gives away furniture to 30 households every Christmas. Mattress Mack has also donated over $4 million to the Houston Livestock Show & Rodeo for student scholarships.

And that's just the tip of the iceberg. Here are some other charities and causes Mattress Mack supports:

His giving nature doesn't go unnoticed. In 2013, President George H. W. Bush awarded McIngvale with a Point of Life Award. The University of North Texas honored McIngvale with the Distinguished Alumni Achievement Award in 2018. That same year, the Mosbacher Institute for Trade, Economics, & Public Policy recognized his contributions to business and public service with the McLane Leadership in Business Award.

The Man Behind the Mattress

Family is the top priority in McIngvale's life. He and his wife, Linda, have three children, Elizabeth, Laura, and James. After 39 years of marriage, the couple still acts like newlyweds. Even though Mattress Mack brags about working seven days a week, he always finds time to support his family.

McIngvale cares deeply about mental health, specifically Obsessive-Compulsive Disorder. Doctors diagnosed his daughter, Elizabeth, with OCD at the age of 12. Her prognosis wasn't promising. Specialists believed the illness was untreatable. However, Elizabeth proved them wrong. At her request, her father co-founded the Peace of Mind Foundation for those diagnosed with OCD. Elizabeth is also the national spokesperson for the International OCD Foundation.

A sudden health scare shook the family in 2019. McIngvale checked into the hospital after experiencing worsening stroke-like symptoms. Doctors released him the following day. But they warned Mattress Mack not to overwork himself. In a Facebook Live video, he half-jokingly responded, "I told them I had a good mattress sale. I got to maybe cut back from 16 hours to 14."

Gallery Furniture is highly popular with locals. It's also one of the most successful independent furniture stores in the country. Even after giving back so much of his hard-earned money, Mattress Mack still has plenty left in his bank account. Jim McIngvale has a reported net worth of $300 million. Gallery Furniture employs just over 200 people and reports annual revenue of $30 million.

Those who dislike capitalism believe it only supports the greedy. Too often, the media draws attention to those who take advantage of the system and parade their wealth. However, this isn't the real value of capitalism.

People like Mattress Mack prove why capitalism is so essential. Not only was Jim McIngvale able to build a furniture empire, but he did so while helping those down on their luck. Being able to make a difference is what makes capitalism so great. As McIngvale once stated, "Capitalists like myself have an obligation to give back and make our communities a better place."

Are you ready to take charge of a problem and help others in the process? Let us help you take the first step. Check out this free 10-part series to get started. We'll root hard for you during your journey.