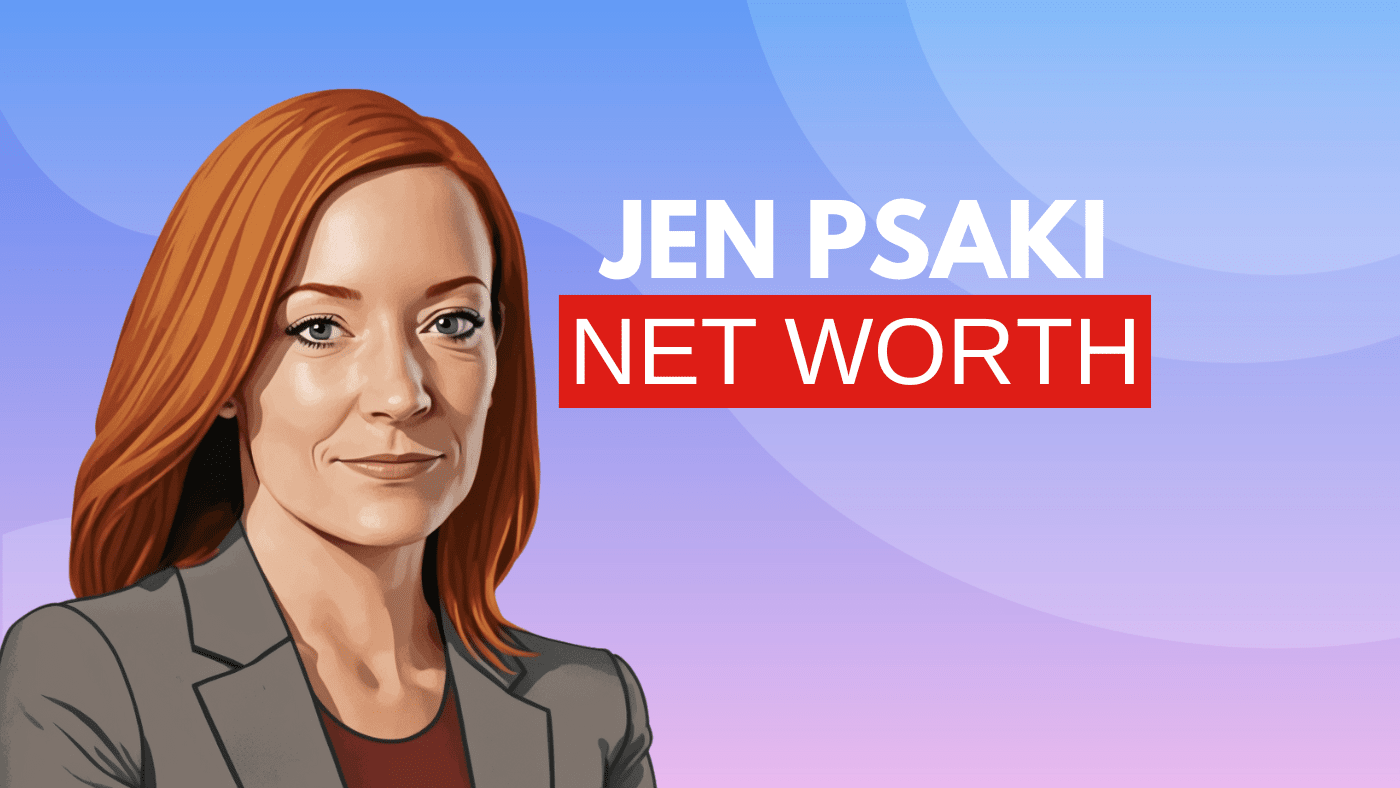 This guide reveals Jen Psaki's net worth, background, houses, husband, and more. You'll also find out how much she makes, what cars she drives, and what property she owns.

What is Jen Psaki's net worth?

According to different sources, Jen Psaki Net Worth is estimated to be $27 million.

Who is Jen Psaki?

Jennifer Rene Psaki is the immediate former White House Press Secretary in the Biden administration. She is a seasoned political strategist and communications professional who has worked in various roles in government, politics, and the private sector.

Jen Psaki, born in Stamford, Connecticut, in 1978, is the eldest of three daughters. Her parents are Eileen Medvey and Dimitrios "James" R. Psaki.

Jen Psaki graduated from Greenwich High School in 1996 and the College of William & Mary in 2000, where she studied for a degree in English and Sociology. At William & Mary, she was a competitive backstroke swimmer for two years.

Psaki is a member of the Chi Omega sorority.

A member of the Democratic Party, Jen Psaki began her career in 2001 with the re-election campaigns of Iowa Democrats Tom Harkin for the US Senate and Tom Vilsack for governor. Psaki then became deputy Press Secretary for John Kerry's 2004 Presidential campaign. Between 2005 and 2006, she served as communications director to US Rep Joseph Crowley and regional Press Secretary for the Democratic Congressional Campaign Committee.

She Served in Different Roles in President Obama's White House

In the 2008 Presidential campaign, Jen Psaki served as traveling Press Secretary for senator Barack Obama. She followed President Obama to the White House as deputy Press Secretary (2009) and deputy communications director from December 2009.

In 2012, Jen Psaki returned to the White House and became the Press Secretary for President Obama's 2012 re-election campaign.

In February 2013, President Obama appointed Jen as the spokesperson for the US Department of State, a role she served until 2015.

From 2015 to 2017, she served President Obama as the White House communications director and stayed through the end of the Obama administration.

Jen worked as the Press Secretary of President Joe Biden

In November 2020, Psaki again left CNN and joined the Biden–Harris transition team. Previously she'd served as the Communications Director for the Biden-Harris campaign during the 2020 Presidential election. Later in 2020, President Joe Biden named Psaki as the White House Press Secretary for his administration.

She left her role as the Press Secretary in May 2022, and her principal deputy, Karine Jean-Pierre, was named her replacement.

Jean Pssaki joined MSNBC in 2022 on a 3-year contract. MSNBC announced her as their political analyst in the 2022 United States elections and the 2024 Presidential campaign. MSNBC also says she will host a show on MSNBC's Peacock streaming service in 2023. Psaki's 3-year contract with MSNBC will earn her $12 million per year with an additional $2 million bonus based on her cable ratings, which may significantly boost her net worth.

What properties does Jen Psaki own?

Jen Psaki owns property and top luxury car brands, including Jaguar and BMW. She owns about seven properties worth $30.65 million. She is also expected to earn up to $14 million with MSNBC.

Here's a description of what the former White House Press Secretary owns.

This is probably the property Jen lived while working for the Biden administration. According to other sources, the actual value of this villa in Washington is $4 million.

It's yet to be known why Jen owns the $300,000 condo in Denver, CO, but this is one of her key properties listed. Sources say that this Denver, CO, property is worth $750,000 and is a commercial plot.

Other sources say this villa in Florida is about $9 million. However, its actual value is not clear, but the home in Florida is real.

The $200,000 house in Charlottesville, VA is a key property among Jen Psaki's portfolio.

She owns a house in Rockville, MD, estimated at $150,000. It's unknown what she uses this Maryland house for or whether she spends time in it.

Jen was born in Stamford, CT, and owns a $125,000 house. Perhaps she has a connection to the city and owns different properties.

Jen Psaki's Boston house is estimated to be $100,000. This property is right inside Boston and could be her Boston office.

Another of Jen's properties is the $75,000 condo in Chicago, IL. It's not documented what she used this property for.

Jen Psaki owns luxury cars. Some of them are:

Besides these listed cars, Jen Psaki also purchased a Bentley, its value is still unknown.

How much does a White House Press Secretary make?

The salary of the White House Press Secretary is not publicly disclosed. However, it can be assumed that it is a high-paying position due to the level of responsibility required for the role. Different sources estimate that Jen earned $183,000 annually.

What is Jen Psaki's net worth?

While Jen Psaki's net worth is not publicly available, it is estimated to be $27 million.

What is Jen Psaki's salary as white House Press Secretary?

Jen Psaki, earned $180,000 while at the White House. She was also entitled to a travel allowance in addition to her income.

What is Jen Psaki's background?

Jen Psaki is an American political advisor, born in Stamford, Connecticut, in 1978. She graduated with a degree in English and sociology from the College of William and Mary. She has become a seasoned political strategist and communications professional with experience in various roles in government, politics, and the private sector.

What is Jen Psaki's marital status?

Jen Psaki is married to political assistant Greg Mecher. The two met in 2006 at a Democratic Congressional Campaign Committee and married in May 2010. They have two children.

Jen Psaki is a highly experienced political strategist and communications professional. Her net is estimated to be $27 million. She currently works as a political analyst at MSNBC and served as the immediate former White House Press Secretary for President Joe Biden's administration.

If you want to become rich through the world of politics, Capitalism.com can’t help you there. We believe that Capitalists, not governments, create meaningful change to make the world a better place.

But if you want to build a business that changes lives and creates generational wealth at the same time, that’s our specialty.

The first step is finding the business that’s perfect for YOU to build. Watch this free video to find your million dollar idea.