Larry Ellison Net Worth: What Has Oracle Brought Him? While it has been known to vary over time, Larry Ellison's net worth is currently estimated to be $62.5 billion.  His net worth was estimated to be around $28 billion in the year 2010 but drastically increased in September 2011, when Forbes released a publication which placed him as the fifth richest man in the world, Larry Ellison’s net worth as published by Forbes was $36.5 billion. Things also turned in his favor in 2012, when he was listed as the third richest American with a net worth of $44 billion.

Various cool deals have fetched Larry huge money, citing an example of how he made $3.5 billion from the sale of NetSuite, a company he owns 35% of shares, which eventually got purchased by Oracle, another company he heads. Talking about heading a company, Larry's leadership skills have been regarded as been "supreme" by various news outlets. Some even regard him as authoritative and dictatorial. Knowing how to be a leader has been pivotal for his growth.  According to Don Hellriegel and John Slocum, Ellison is known to always get the best of his employees through motivating them by giving out gold coins as bonuses.

Larry Ellison was born on August 17th, 1944 in New York City, upon which his unofficially wedded Jewish mother gave him up for adoption after contracting pneumonia at just nine months. Larry Ellison's education was a little clumsy, from leaving the University Of Illinois after his second year due to family issues and also enrolling at the University Of Chicago for just one term before moving to Northern California at age 22. Even though he holds Israel in high esteem, he has severally pointed out at the fact that this has nothing to do with the country's religious prowess and fervency. He publicly declares that he only believes so much and respects the country's innovative spirit in the technology sector. 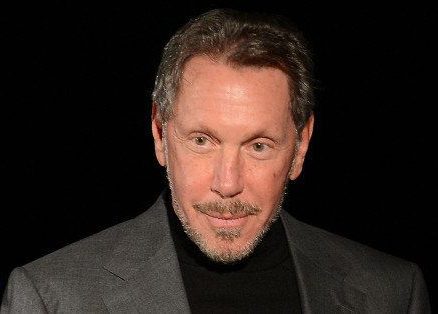 Unlike business, he has not been so lucky when it comes to heading a family. He has been married and divorced four times. His love journey started as far back as 1967 when he married Adda Quin but it all ended in 1974. Ellison got romantically involved and got married to Nancy Wheeler Jenkins, a relationship which only lasted for a year. Larry found love again afterward, this time with Barbara Boothe, a former receptionist at Relational Software Inc. The union was blessed with two children but in 1986, they both went their separate ways. Ellison was far from done when he got married to Melanie Craft in 2003 at his Woodside estate. Larry and Melanie’s union lasted for seven years.

The idea of Larry's major source of income (Oracle) came to be when a young Larry Ellison was still working at Ampex in the 1970s. He came across Edgar F. Codd's research on relational database design and this changed the orientation Larry had on a relational database and in the long run, it led to the creation of Oracle after an initial investment of $2000. Oracle quickly flourished in it's sector thanks to Ellison's nack for hiring top talent.  For years, Larry Ellison's lavish spending has been questioned but due to the mouth-watering and bountiful salary Oracle pays him, his wealth has never been questioned. However, how he chooses to spend his hard earned money has been considered as ‘no one's business'.

It is a known truth that Ellison was also a recipient of the $1 basic salary scheme for the fiscal year of 2010, for tax purposes. Anyways, that never hindered him from being named as the sixth-richest person in the world as released by Forbes in March 2010. In addition, he was reported as the best-paid executive in the last decade, after being paid a total of US $1.84billion.

So, with all these billions, what exactly does Larry spend his money on?

He has often been referred to as the Silicon Valley's Bad Boy. Ellison's exotic and luxurious lifestyle is one you can hardly hate. Having been scored 4/10 by Forbes when it comes to philanthropy, His attention is obviously focused on spending his money on what benefits and satisfies his ever-increasing taste for sophistication. Before elaborating more on Larry's lifestyle, in the year 2002, it was revealed  that his financial adviser once told him to slow down on the rate at which he blows away money after spending $25 million on a villa in Japan, $20 million on what he considered as "lifestyle" and $194 million on a yacht. Accountant Philip Simon's mail was read in court after emerging in court documents "I'm worried Larry, we have a freight train going down a track hitting a debt wall". Anyways, that's all in the past as the Larry Ellison of today has no plans of slowing down.

Larry owns a massive world class golf course which is worth $42.9 million. The golf course is a 249-acre estate in Rancho Mirage, California which is popularly referred to as Porcupine Creek. He has been pictured so many times playing golf with dignitaries and close friends, notably with Mark V Hurd, the current CEO of Oracle.

You just can't dispute the fact that Larry Ellison is a big fan of landed proprieties as he acquired a $110 million flagship mansion in Woodside California. The mansion was built to look like a feudal Japanese village and a two-acre man-made lake was made available to complement the magnificent mansion. Another $180 million was thrown into buying more than 11 properties in Malibu, California. Another transaction still went on smoothly when he decided to spend $65 million on five contiguous lots at Malibu's Carbon Beach.

He showed no sign of stopping in early 2010 when he bought the Astor's Beechwood Mansion in Newport, Rhode Island for $10.5 million while in 2012, it was publicly declared by the Governor of Hawaii that Larry Ellison has agreed to purchase 98% of Lanai, which is Hawaii's sixth largest island. This reportedly cost him an estimated price of $500 million.

Tell me what is as cool as being a licensed billionaire pilot with fleets of planes at your fingertip. Although one of which is a decommissioned MiG 29, which the United States government prevented him from importing into the country. He owns a Gulfstream G50 private jet which has a list price of $75 million and also an SIAI-Marchetti S.211 Military jet, which was designed in Italy.

Ellison sire has a classy taste in cars. Over the years he has acquired a whole lot of exotic cars which include a Lexus LS(XF40) and a Lexus LFA, not ignoring his favorite Acura NSX, which he gives out as gift each year of its production. Others cars which can be found in Larry's garage include McLaren F1 and Audi R8.

The American billionaire is an obvious yacht lover who doesn't hide his love for the slick and light ship. He has owned several gigantic yachts. He used to own the 12th largest yacht in the world which is named Rising Sun. A 138 meter (453ft) yacht which was built in 2004 at Lurssen, costing over $200 million. Realizing that the yacht hinders him from accessing various interesting yachting destinations, Larry sold the yacht to David Geffen. He later purchased the Musashi of just 88 meter which reportedly has a price list of $130 million. Ellison is also the owner of Izanami Yacht (now Ronin), the yacht is not as big as the Musashi as it is only 58 meters long. It was purchased in 1999.

It will be so wrong to say Ellison's love for the water is solely based on the pleasure he derives from being a highly placed passenger as he is also interested in sailboat racing. He founded BMW Oracle Racing which competed for the 2003 Louis Vuitton Cup. In fact, Larry and his team recorded a landmark victory when they became the first challengers to win a "deed of gift" match. It was recorded that Larry served as a crew member in the second race of the competition. Anyways, there is something else Ellison has over the years developed an interest in, Tennis. He bought the Indian Wells Tennis Garden, a tennis facility located in California, in the year 2009 and also the Indian Wells Masters tournament.

Lawrence Joseph Ellison was known as a hyper-competitive leader during his days as Oracle Corporation's CEO before stepping down to become the Chief Technology Officer. Even at Larry Ellison’s age, 74 years, no one can deny the fact that this man brings a classy and exquisite taste in everything he lays his eyes on.

If you're serious about growing your net worth as Ellison has and the 1% do, download this E-Book.