Meet Suzy Batiz, the woman who built a million dollar poo empire. No, that wasn’t a typo – she is the founder of Poo-Pourri, a convenient product that eliminates bathroom smells. Having failed, again and again, Suzy Batiz is the true definition of an entrepreneur. She picked herself up and started a million dollar enterprise, translating to a massive net worth!

Her road to success has been long and bumpy, but she’s grateful for every moment and experience that led her to where she is now. Even with such success, Suzy’s goals only continue to grow bigger! She continues to put her passionate ideas into action and follow her intuition.

By age 38, Suzy Batiz had encountered significant life events before founding her first successful company. She was born in Arkansas and started chasing her entrepreneurial dreams at age 16, although her parents weren’t very supportive.

In high school, she painted clothes and sold them out of her car. Most notably, she created a pair of denim-covered pumps that caught the eyes of GUESS (she was just 17). They asked her to come to New York, but her mom convinced her not to.

Surviving Not One, But Two Bankruptcies

As she grew older, the rocky road continued. By Suzy Batiz’s 19th birthday, she owned a bridal salon that was bankrupt just a year later. In her early 20s, Suzy had been through a lot. Not only had she experienced marriage, bankruptcy and divorce before most people even graduate college, but she went through sexual abuse as a child, depression, and a suicide attempt at age 21. She was in an abusive marriage by 23, but was able to free herself from this as well.

Her second bankruptcy occurred in 2000 when she tried to create a website matching recruiters with potential employees based on corporate culture. The idea was genius, but a little too advanced for that time period.

After reaching rock bottom, she picked herself up in a unique way. Suzy Batiz embarked on a spiritual sabbatical during which she studied many religions, focused and self development and discovered the works of Viktor Frankl, Byron Katie and Florence Scovel Shin which radically changed her life.

A few years into her sabbatical, the idea for Poo-Pourri came about and Suzy Batiz’s net worth would soon skyrocket.

She had sought out spiritual methods of healing and speaks of her experiences with Ayahuasca on a few different podcast episodes that she’s featured on.

Although she described the ceremonies as horrific, she began to experience incredible shifts and feelings of freedom. She’d been seeking such enlightenment for years. Her priority became learning, growing, self-love, and becoming someone she’s proud of. She detached herself from money. 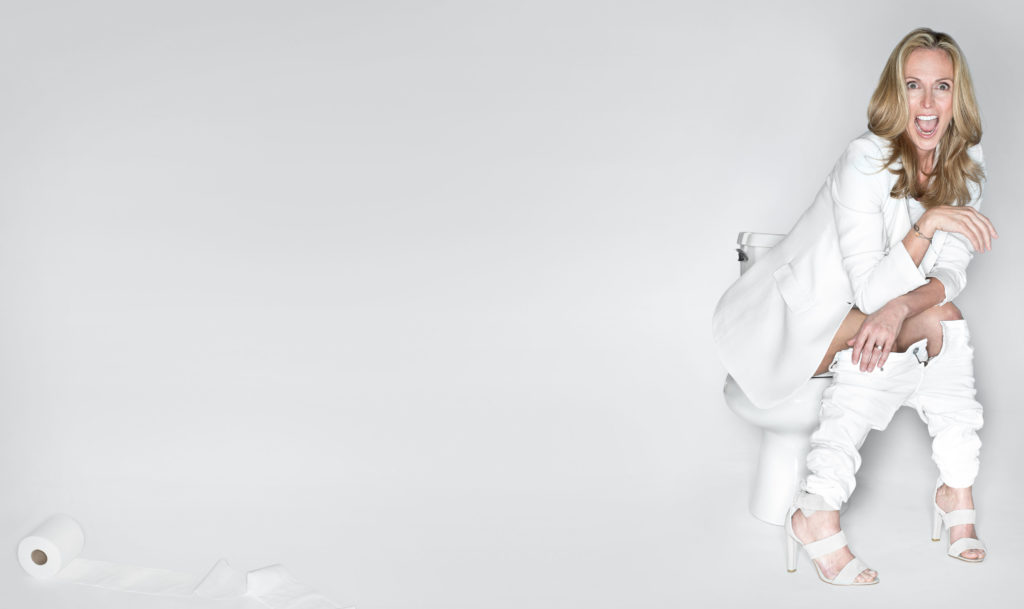 Thousands, perhaps even millions, let their entrepreneurial spirit and dreams be crushed by failure. Suzy was not one of these people! She founded business after business, only for them to fail. When the stock market crashed in 2000, her home and cars were repossessed.

In this Forbes interview, Batiz shares how she lost everything. “I'm crawling into my Range Rover trying to get my stuff out of the glove box before it was repossessed.” By this point, Suzy Batiz’s net worth was at rock bottom.

Even when she gave up on business, her entrepreneurial spirit was still there, just waiting to flourish. When a genius idea popped into her head, she sprung into action.

Do you ever see a revolutionary product and say, why didn’t I think of that? Poo-Pourri is one of those products, and Suzy Batiz proudly created it. It’s not just a product though, she treats her company as a living entity. She’s the mother and is constantly surprised by its growth.

This best-selling bathroom product that has become a staple in millions of households! You simply spray it before you go to the bathroom, and it prevents bad smells.

After launching, it’s slowly grown towards a 7 figure business that she has 100% ownership of. Her and her husband at the time didn’t borrow any money to start it, nor have they relied on investors (even though there have been plenty of offers). 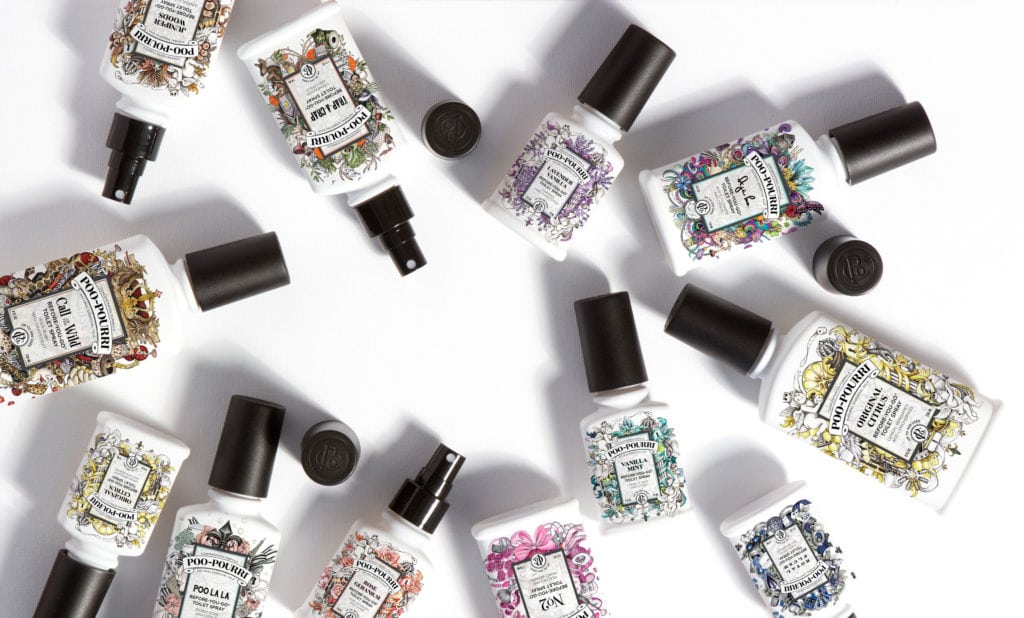 Batiz came up with the idea in 2006 when her then-husband’s bathroom odor was nearly unbearable. Her solution was a natural formulation made from essential oils. The best part? It actually worked! When sprayed prior to using the toilet, her oil formulations were able to trap the odor. It truly transforms the bathroom experience.

Poo Pourri came to Suzy when she least expected. After failing again and again, she had forgotten how to stay motivated while starting a business. She had given up on her dreams and thought she wasn’t meant to be an entrepreneur. She swore that she wouldn’t get back into business. However, fate proved her wrong.

Capitalizing on the "Ah-ha!" Moment

When the genius idea came to her two years after she gave up, she immediately put it into action. Suzy Batiz and ex-husband Hector spent $25,000 of their own money to create Poo Pourri. After the initial idea, it only took 9 months until her product was on the market. She wanted to put her plan into immediate action, rather than spend a bunch of time planning (a lesson she learned from her previous failures).

Once Poo Pourri was on the market, they started by emailing friends and family, asking for testimonials. Soon, online orders came in! They were referred to more and more people, soon people that owned retail stores. By the first month, Suzy Batiz’s Poo Pourri was already sold in 15 stores selling her product.

In the first year, they had already sold $1 million worth of products! The growth continued slowly over about six years, when the biggest boom occurred.

Suzy posted a humorous online ad in 2013, which went viral and has now been viewed over 37 million times. They had $4 million in back orders nearly overnight. Her production company couldn’t fulfill it, but Suzy and Hector Batiz (mostly Suzy) made it happen.

Now, Poo Pourri is sold in over 20,000 retail outlets. The company is worth millions, they have a few different scents to choose, and best of all –  they remain debt-free. Suzy’s next business also stemmed from her love for essential oils and natural products. Her dream was to create all-natural cleaning products that were sustainably sourced, with the lowest carbon footprint possible, that smelled incredible, and that worked even better than conventional cleaning products.

After two years, she fulfilled her aspiration! Suzy Batiz’s Supernatural launched in October of 2018. Her beautifully designed products not only work and smell amazing without any harmful ingredients, but they make an impact on the world.

“Supernatural was born with the goal of creating a better world for our bodies, souls, and planet — it's about connecting humans back to nature.”

Published in January of 2018, Suzy wrote a book to inspire other entrepreneurial spirits like herself. The Woo of Poo is a humorous self-help book about the practical magic and self-growth that has built her multi-million dollar Poo Pourri empire. She speaks about living with intention, combating fear, manifesting your dreams, and more.

As the inventor of Poo Pourri, Suzy definitely knows how to be an entrepreneur. Lucky for us, she shares her knowledge and experience in a number of ways! She’s featured on various podcasts, speaks at events, offers knowledge on her website and social media accounts, etc.

A Suzy Batiz podcast or speech will always be filled with excitement. You can truly see that she loves what she does. With Suzy’s life experience and numerous entrepreneurial ventures, it’s no wonder why she’s such an inspirational figure. She’s been through it all. When she spoke at one of our events, we were entranced.

The video below shows Suzy Batiz speaking at our event! We loved listening to her story, hardships, how she picked herself up after reaching rock bottom, her story of healing, how she built her company, and tips for any aspiring entrepreneur.

Suzy is currently unmarried but has had two previous husbands. Her first was abusive, and second ended soon after she started Poo Pourri.

Where Is Suzy Batiz Net Worth Located?

We know that Suzy’s net worth is from her company that she’s 100% owner of, but what else? Her house!

Based in Dallas, Suzy lives in a beautiful dream house. It was transformed from a 19th-century church into an incredible oasis. She calls it sacred and her sanctuary – we can understand why. The towering ceilings and huge, unique windows look incredible. Imagine waking up every day here! Suzy Batiz’s Instagram shares plenty of photographs of her beautiful sanctuary.

The 15,000 square foot home is her living space, work space, fun space, and everything space. Suzy doesn’t believe in separating her work life from home. The home has nine guest bedrooms, an upstairs living room/office, a downstairs living room, a meditation room, and eleven (and a half) bathrooms!

That just about sums up the incredible story of how Suzy Batiz’s net worth was built. She’s very inspiring and we’ve learned a great amount from her! We can’t wait to see how she continues to turn her ideas into magic.