Tom Wheelwright Net Worth – How Taxes Made A Millionaire

Wheelwright teaches the wealthy how to best invest their money wisely and permanently reduce taxes.  Did you know that income from the first 4 months of the year goes entirely to the government? This is a scary fact to look in the eye. On the bright side, Tom Wheelwright will tell you that this doesn’t have to be the case. He’s an expert CPA, best-selling author, speaker, and known as Robert Kiyosaki’s personal tax advisor.  All of this has built Tom a net worth of $5+ million.

Wheelwright currently resides in Tempe, Arizona. He went to school at The University of Texas at Austin for his Masters of Professional Accounting degree. Tom also served as an adjunct professor in the Masters of Tax program at Arizona State University for 14 years. Here, he created multi-state tax planning techniques.

In addition, he led the professional training for thousands of CPAs at Ernst & Young’s National Tax Department in Washington, D.C. He looks younger than he is, but Tom Wheelwright’s age is hovering close to 70 years old – 66 to be exact! His birthday is April 29, 1953.

Why Learn About Taxes?

You might wonder how Wheelwright has become so successful simply by teaching others about taxes. There are millions of people (or more) who lack knowledge about taxes and how to make them work towards your advantage. Many people don’t even realize this is possible!

This is understandable – the subject isn’t exactly taught in schools. You have to go out and learn the information yourself. How many kids are going to go out and teach themselves about tax strategies? It may not be fully learned until thousands (or even millions) of dollars are lost to taxes. Some people never learn!

Wheelwright aims to inform people about strategies you can take to permanently reduce taxes. Most people think that the only way to reduce or avoid taxes is through illegal methods, such as white collar crime, but this is absolutely not the case. Tom Wheelwright books, speeches, podcasts, and blog posts are filled with an abundance of knowledge on the subject.

Most normal people want to make as much of their money as they can while paying as little in taxes as possible. The problem is, tax laws can seem incredibly confusing. As a result, most people (including accountants themselves) think about taxes completely wrong. This results in them paying way too much in taxes and sabotaging their wealth journey! 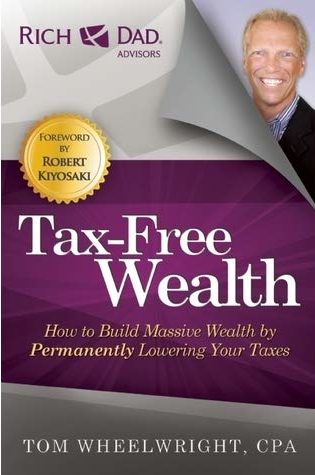 Now that we’ve given a brief insight into what Tom Wheelwright does and the logic behind it, let’s get into his publications. Wheelwright has written two books of his own, the best-seller being Tax-Free Wealth. Additionally, he wrote 7 Investments That the Government Will Pay You to Make. His work has been showcased by a variety of magazines including The Washington Post, The Wall Street Journal, Forbes, Entrepreneur, Accounting Today, and more.

He also has four other book contributions on his portfolio. Three of these were written by Robert Kiyosaki (best-selling author and multi-millionaire), while one was written by Phili McKernan.

If you’re interested in learning more broadly about taxes, his most popular book is packed with knowledge. He shares about why governments want you to pay fewer taxes and how to save on them. Tax Free Wealth by Tom Wheelwright gives insight into all aspects of taxes and tax planning.. His ultimate goal is to help people change the way they think about taxes and show that they can be used to your advantage.

Aside from his books, Wheelwright created an impressive company of his own! He started a revolutionary platform of educational tools and a global network of CPAs trusted by over 244 thousand successful entrepreneurs and investors. Tom Wheelwright’s Wealthability features CPAs that are personally trained by him and his team. Faced with the task of hiring top talent, he’s done pretty well. The company’s goal is to reduce taxes and promote wealth!

If interested, you’re able to schedule a consultation call with them to discuss your needs and what they can do for you and your company. Pricing depends on your company and situation, but people have shared prices starting at a couple thousand. We’ve also seen up to $15k for an entire 2 to 3 month strategy.

These prices might seem high, but it would be worth the investment as long as they keep their promise of 10–40% less in taxes! There aren’t many Wealthabilty reviews since it was founded just last year, but the ones that do exist are very positive.

Another company that the tax expert founded is called ProVision, which is very similar to Wealthability. Although he founded it, Tom Wheelwright has separated himself from this company and a new team is running it. They state that their clients have reduced taxes by 10–40% as well. Their team can help with tax strategies as well as wealth building plans.

In addition to his informal books, Wheelwright shares his knowledge with the world through events, speeches, webinars, his blog, and the Wealthability podcast. If you like to read your knowledge instead, the Tom Wheelwright blog has all kinds of learning material as well as transcripted podcasts.

Wheelwright absolutely knows how to be a leader, shown by the number of events he’s spoken at. A few of these include Never Work Again, Financial Prosperity, and Gold versus the US Dollar. He’s also spoken at hundreds of professional organizations such as the Pharmacy Development Services Conference, Arizona Bar Association, Arizona Society of CPAs, National Real Estate Investment Club, and Women’s President Organization.