Do you have a prototype you’re ready to launch, but still need the capital to get your project off the ground? It’s time for you to pair your Amazon business with a crowdfunding campaign.

Ross’ first crowdfunding campaign was a learning experience. As she outlines in the full podcast, Ross didn’t know much about running a fund drive campaign upon the launch of her first kickstarter. However, she regrouped, outlined her mistakes, and relaunched after three months.

In just 42 days, she raised $600,000 for her campaign. Since the wild success of that crowdfunding campaign, Ross has continued to help raise money for startups via crowdfunding. To date, she has helped raise over $1.5 million via crowdfunding.

Crowdfunding in an efficient way to raise the capital necessary to launch a product into massive profitability. However, only certain kinds of products are best suited for success via crowdfunding.

According to Ross, physical products do best. However, events can do well too. The product should be a prototype or in the very late stages of development upon the launch of a crowdfunding campaign.

It’s best to work with design shops in order to speed up the process when the crowdfunding goals are met. The best part about crowdfunding is that they’re not a “one-time” campaign. Businesses frequently use them time and time again for the release of new products and the extension of their brand.

If you’re just starting your business, utilizing a kickstarter not only provides you with a base of capital resources, but it also generates an audience for your business to thrive on. Once your kickstarter is over, Ross explains, you walk away with email lists that you can continue to hit with new products.

Listen to the entire podcast to find out more of the tips and tricks to launching a successful Amazon business with a crowdfunding campaign.

Subscribe to the Freedom Fast Lane podcast on iTunes!

MORE GREAT EPISODES OF FREEDOM FAST LANE ON CAPITALISM.COM:
• How To Find the Next Private Label Products that Could Sell $30 Million Annually On Amazon
• Dropout Turned Entrepreneur Kicked Heroin and Now Sells $50k in Fitness Products Per Month
• Everything Has an ROI, But Not All Investments Are Created Equal: How to Get the Highest ROI 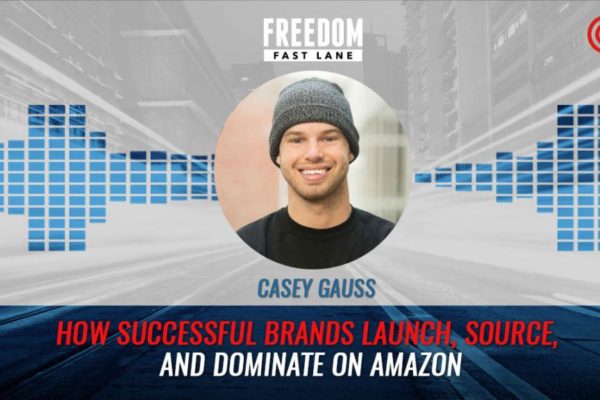