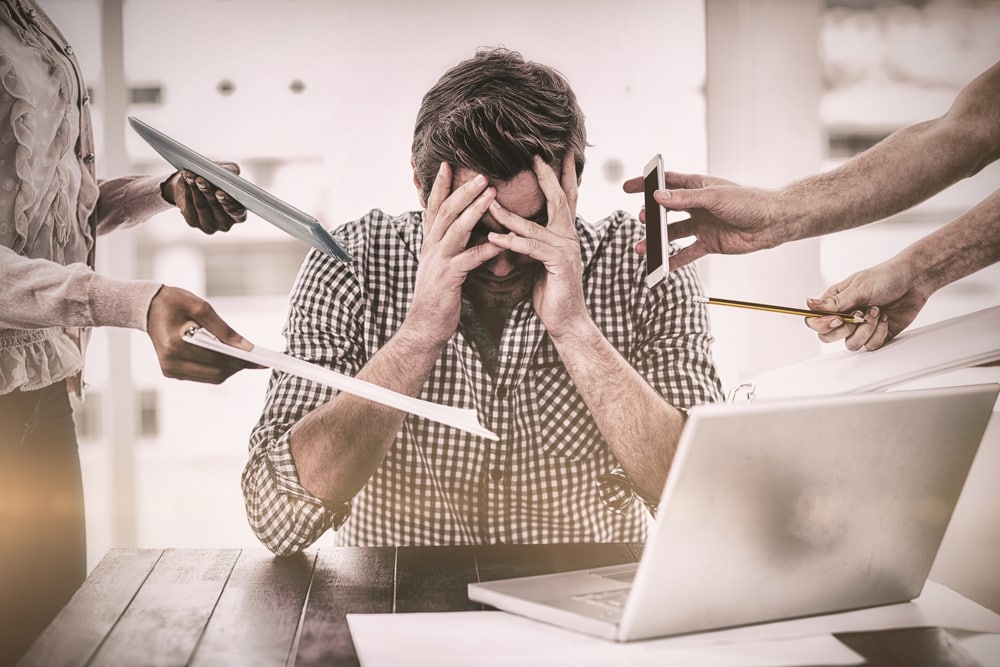 "You'll write your own paycheck."

"You can work when you want, from wherever you want."

Honestly, it doesn't quite work that way.

The reality for most entrepreneurs is that they're exhausted, stressed out, lonely, overwhelmed, and halfway considering going back to a day job because at least they'd made good money.

It gets worse if you're a solopreneur running a million-dollar business. If you've ever heard the phrase "golden handcuffs," it applies here. You're making enough money to keep you hopeful that your company has a future. But you're not making enough to make the numbers work for big inventory orders. That means you probably have sleepless nights worrying about selling through. Especially during pandemic slowdowns, running out of inventory could mean a long lag time before you can stock up again - and that's not good for business.

You also might not be making enough to pay for the help you really need. So, guess who's doing everything? You. You're doing tasks that make you want to bang your head on a brick wall. These tasks would be easy for someone else - in fact, there are people who'd do them with glee because it's within their zone of genius. But you can't afford their help, so you do them yourself.

Don't Be an Entrepreneur.
Be an Owner Instead.

What if you could go from an exhausted entrepreneur to being an owner in the driver's seat of your business? What would it be like if you could focus on the part of your business that lights you up? Remember how exciting it was when you were in product creation mode way back when? Everything felt possible. You were on a mission to change your customers' lives - or at least delight them.

And what would it be like to make more money and have more free time than you've had since you started this adventure? That freedom is probably what lured you into becoming an entrepreneur in the first place.

How's an Entrepreneur Different from an Owner?

But here's the official definition of what it means to be an entrepreneur:

Entrepreneur: a person who organizes and operates a business or businesses, taking on greater than normal financial risks in order to do so.

Some would even say that an entrepreneur is someone who creates businesses.

But that's a far cry from the stressed-out reality most entrepreneurs live. Many of them read Robert Kiyosaki's Rich Dad, Poor Dad. Their eyes lit up over the idea of going from the Employee quadrant to the Owner quadrant. But the reality is, by becoming an entrepreneur, they landed in the Self-Employed quadrant instead. Only halfway joking, their definition might be:

Entrepreneur: someone who'll work 16-hour days for themself to avoid working 9-5 for someone else.

Too many entrepreneurs get stuck in a cycle of working crazy hours, never taking a day off, and sacrificing the quality of life to keep revenues where it needs to be. Most people never get out of that mode of doing more to make more, so they never get to the point of financial freedom. It's mentally and physically draining.

An owner does things differently. An owner doesn't hustle in the grind or scrape for every dollar. Owners are people like Warren Buffett, Jeff Bezos, Oprah Winfrey, and Elon Musk. Sure, you can make the argument that these billionaires used to be entrepreneurs, but they no longer are. Instead, they have done or are doing three things:

When you look at someone following an owner's business model instead of being an entrepreneur, you'll notice they aren't trying to handle all the things and fix all the problems. They have people in place to do that.

For example, Elon's not turning wrenches at the Tesla factory. He's not scripting the next Tesla ad. He's undoubtedly not fielding customer service calls. Initially, he cast the vision, hired the right people, and made sure the company had enough capital to get started.

Or, take Brian Lee. Brian has built four companies worth billions, including Legal Zoom, Shoedazzle, Art of Sport, and The Honest Company. He was also the first investor in Honey—the app that sold to PayPal for $4 Billion. He shared with Ryan Daniel Moran behind the stage at one of the Capitalism Conferences that his method involves building a network of people he can trust to run the business for him.

Brian does what he does best. He casts a vision, recruits talent, makes sure the money is there, and lets his people do the rest. Again, this is the owner's business model—not just an entrepreneur's mindset.

The difference is clear.

How to Make the Crucial Shift to Owner from Entrepreneur

Shifting your business model and restructuring in a way that takes you out of an exhausted entrepreneur's role to being an owner can feel reckless and unnerving. It might feel like you're about to take your hands off the wheel in rush hour traffic.

But this is the unlock for finally growing a sellable business, staying in your zone of excellence, and enjoying life a whole lot more. It's worth letting this idea sink in and taking action so you can make the shift. Here's what that looks like:

Prepare to build a bigger pie.

Entrepreneurs often cling to 100% equity of their businesses. It's like they baked a pie, and they don't want anyone else to carve out a slice. To them, being an entrepreneur means maintaining control and taking full and sole ownership of the results. So, there's a mind shift that has to happen before stepping into an owner role.

By thinking bigger, they open the possibility of creating a much bigger pie. With a big enough pie, even having a small slice results in vast wealth. Some examples are:

You don't have to own all the equity in your company to do just fine.

Cast a vivid vision for your business.

Who will you serve? How will you improve their lives? What problem will you solve for them? What products will you create that are so good that your customers will line up with open wallets to get them?

Partner with investors, so your business always has enough money.

In exchange for a little piece of the pie, this investor would give your business a cash infusion. That money would fund the teams, systems, and processes the business needs to grow. It might cover inventory buys at scale, so you get better terms. For sure, it would enable you to turn tasks you're ill-suited for over to people who love doing them - and who do them well.

The idea is for your role to be more like that of a movie producer. You're not writing scripts, casting actors, sewing costumes, shooting video, editing, or handling marketing or advertising. Instead, you're pulling together a team of experts to do all that better than you ever could. The result is far better than anything one person could produce alone.

Making this change in your focus can be the difference between a company that makes enough to pay your salary only and a business that can grow into a mid-seven-figure or even an eight-figure exit. The owner's seat is merely a mindset shift away.

The Owner's Model is what we teach inside the Capitalism Incubator. It's how we teach our students to cast a vision for an eight-figure exit and then bring partnerships in that make executing that vision possible. They cast a vision with the first few weeks, launch within the first few months, and create partnerships that help them grow to seven figures or more within about twelve months.

The Capitalism Incubator is currently closed, but we'll open the doors again before you know it. If you'd like to be considered for the next round, head over to Capitalism.com/inc for more details and an application.

Also, Ryan recently recorded a podcast about making the pivot from being an entrepreneur to being an owner. Give it a listen here. Empowering Great Dads Through Style and Swagger: Meet The One Percent Member(s) of the Month, Manny Montilla and Paulina Tillman Trading in His Do-It-Yourself Mindset to Create an Epic Service Brand: Meet The One Percent Member of the Month, Bryan Starck